Harvey Elliott in London for surgery on dislocated ankle 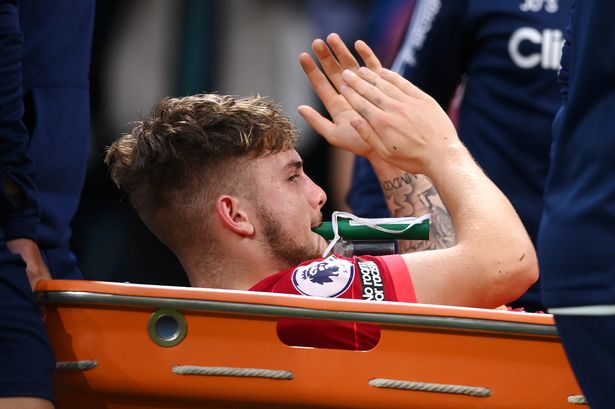 Liverpool manager Jurgen Klopp is awaiting an update after Harvey Elliott has surgery on his dislocated ankle on Tuesday.

The 18-year-old midfielder was carried off on a stretcher during the 3-0 win at Leeds on Sunday following the challenge by Pascal Struijk.

“I spoke to him the night after the game and he was in the best possible place at that moment,” said Klopp this lunchtime.

“Today he is in London and will have surgery today. We all wait for news from that.”

Elliott’s teammates were visibly disturbed by the seriousness of the injury at the time and have all rallied round since.

“What happened with Harvey made me sad. It’s difficult to deal with that when you’re on the pitch,” said goalkeeper Alisson Becker.

“All the players have a big role to support him, we need to do our best in this time.”

Struijk was sent off after the challenge was studided by VAR but in a social media post yesterday, Elliott put it down to a freak accident and said the defender was not to blame.

Leeds confirmed they have appealed against the sending off.

Klopp and Alisson were speaking ahead of tomorrow’s Champions League clash with AC Milan at Anfield.

This in only the third time the clubs have met in Europe, with both occasions being Champions League Finals.

Liverpool came back from 3-0 down at half-time in the 2005 to win on penalties in what became known as the Miracle of Istanbul and Klopp said he nearly switched off the television at the break.

“I was thinking about not watching the second half, to be honest,” Klopp said with a laugh. “All of us except the Liverpool dressing-room thought the game was decided.

“And it then became one of the biggest football sensations ever. I’m glad I didn’t switch the telly off and watched the whole game.”