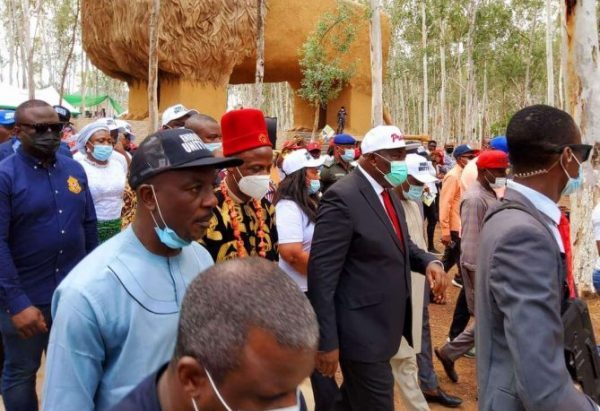 Governor Ifeanyi Ugwuanyi of Enugu State on Saturday inaugurated the Unity Park, Enugu, a tourist attraction and place for relaxation for public use.

Performing the ceremony, Ugwuanyi said the development of the park was in line with his administration’s urban renewal drive.

He said the project would offer the state an opportunity to become the tourist hub in the country.

The governor said his administration through the development of the Unity Park had responded to a yawning gap in the lifestyle of the Coal City.

He explained that the park had a reinforced concrete pedestrian walkway measuring about 1.9km, and monumental concrete roaring lion sculpture measuring 42 feet high.

Ugwuanyi said: “It was widely believed that the sculpture of a giant roaring lion at the park currently questions the existing world records on lion sculpture.

“My  administration has applied to World Records Organizations to review this and allocate to us our rightly place in world history.”

Ugwuanyi pointed out that the serene ambience of the Park makes it a good place to be, relax and reflect.

He, therefore, assured the public that his administration would guarantee adequate maintenance and cleanliness of the park as well as security of the visitors.

He said: “The tourism potential of the Coal City was sub-optimised in the past and  its ambience challenged as residents yearned for a new paradigm.

“Our administration responded to this yawning gap in the Coal City lifestyle by approving the development of the Unity Park, Enugu, in October 2019.”

Earlier in his welcome address, the State Commissioner for Culture and Tourism, Ugonna Ibe, commended Ugwuanyi for the landmark feat in enhancing Enugu State’s status in both local and international tourism.

According to him, after the demise of the Zoological Garden and Polo Park, the state lacked a recreational park to satisfy the relaxation needs of both local and international tourists who visited Enugu.

Ibe maintained that the newly developed park would assist the state government in attracting tourists, diversifying her economic base and creating job for the teeming youth.

The event was attended by some Nollywood stars and tourists in the state.