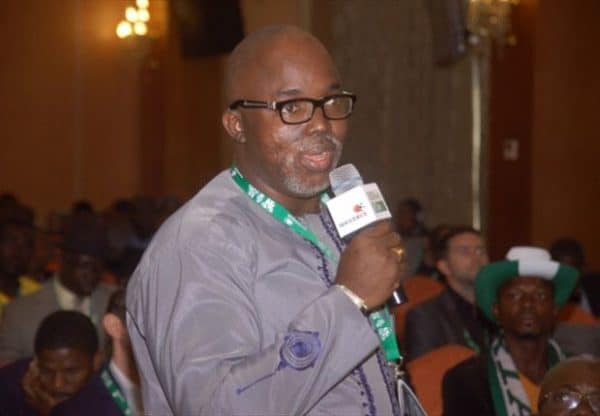 The bid by the President of the Nigerian Football Federation, Amaju Pinnick, to secure a seat in the FIFA Executive Committee has been given a major boost with his formal endorsement by the Federal Government through the Ministry of Youth and Sports  Development.

The Permanent Secretary, Ministry of Youth and Sports, Nebolisa Anako, said this on Thursday.

Anako said: “When the President of  the Nigeria Football Federation, Mr. Amaju, informed the Minister of his intention to fly Nigeria’s flag in the upcoming FIFA Executive council election, the Minister assured him that the Federal Government and indeed all Nigerians would lend their support.

“Amaju’s bid is not just for Nigeria, but Africa’s quest to assert her position as a strong voice in world football.

“Amaju’s ambition would further reposition Nigeria in the global football map where we have made remarkable inroads.

“If he wins, it would not just be a victory for the Federal Government and Nigerians alone, but the entire African continent.

“He would be a great ambassador in the FIFA Council.”

“As a member of CAF executive, Pinnick is aware of the task ahead and must appreciate the Federal Government support to the actualisation of his dream.

“On behalf of  the President of the Federal Republic of Nigeria, Muhammadu Buhari, GCFR, and all Nigerians, we hereby pledge our  unflinching support to Mr. Pinnick because his victory would be our collective victory.

:Let us all rally  round him so that we can have a strong voice in world football which would create ripple effects on our football Development.

“We believe Amaju can use his position and connections in CAF and FIFA to help promote and develop Nigeria and Africa football in all ramifications.

“Let us be resolute in our support.

“The Minister, like other Nigerians, would be elated to see Nigerians aspire and win such exalted offices and be among the very best in the world.

“This is the only way our country and the African continent can have a say in the committee of football playing nations.

“This is no time to stand on the fence, but to be partakers in the scheme of things.

“While wishing Amaju victory, we assure him of all needed support to make this dream a reality.”

Oyok Oyo Orok and Dr. Amos Adamu are the two Nigerians that had occupied this enviable position.