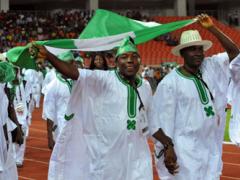 The ongoing 2013 Federation of Public Service Games in Makurdi, Benue State on Monday claimed a life with the death of Sunday Dare, representing the Federal Character Commission.
Yohanna Sambas, the Chairman, Publicity Committee of the Games, who confirmed the death to the News Agency of Nigeria on the telephone, said Dare dropped dead on the badminton court.
Sambas said the deceased was on the court facing a player of the Police Service Commission when he suddenly slumped dead.
He said: “It is sad to confirm that the Games has recorded a casualty.
“One of the athletes, Mr. Sunday Dare, slumped and died this (Monday) morning while playing on the badminton court.”
An eyewitness, who pleaded anonymity, told NAN that the player was given artificial respiration after he slumped.
He said even though the late Dare responded to the first aid treatment, the crowd, which pushed forward to see what was happening, prevented him from getting further assistance.
NAN reports that the death of Dare badly hit the FCC camp as many members of his team wore mournful looks.
The games had started on December 13, with the football event, while the opening ceremony was held on December 16.
Fourteen events in the male and female categories are featuring at the games expected to end on December 21.