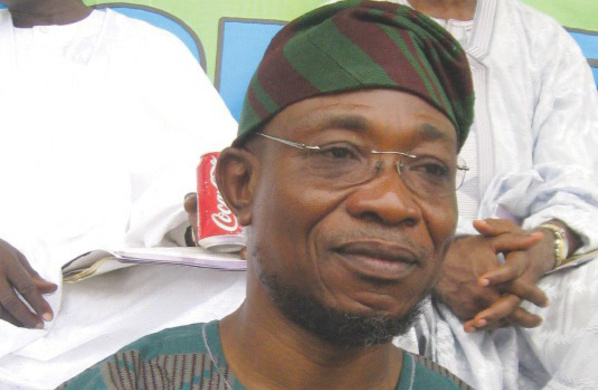 Share
Facebook Twitter LinkedIn Pinterest Email
The Governor of Osun State, Ogbeni Rauf Aregbesola, has described the forthcoming February elections as one that will liberate the Nigerian masses from current economic recession and under-development that have plagued the nation in the last 16 years.
The governor stated this at the All Progressives Congress campaign rally held across the Ife federal constituency on Wednesday.
Aregbesola called all eligible voters to see the elections of this month as a date with destiny, which must be accorded full concentration and diligence.
Leading the campaign to the cradle of Yorubaland, the governor condemned the 16 years of the Peoples Democratic Party presidency, which he said had been characterised by corruption, insecurity, infrastructural failure and untold hardship.
He affirmed the readiness of the APC standard bearers, Gen. Muhammadu Buhari and Prof. Yemi Osinbajo, to put a stop to corruption and make Nigeria a country where every citizen has a sense of belonging.
According to the governor: “‎I want to use this opportunity of our campaign to Ife to tell our people that the forthcoming election is as important as the August 9governorship election in which all of us stood up in defence of truth.
“We were not in any way moved by their ploy to intimidate us.
“We must all come out to vote and at the same time ensure that your votes count by protecting the votes.
“We must ensure that all our National Assembly members and the state Assembly members are voted for.
“Voting for all our candidates will complement our administration’s policies and desire to continue to raise the level of governance and infrastructure in our state.
“We must ensure that the PDP fails in the coming election.
“With this, we will be able to ensure that they have nothing to do in our land.”
Earlier at the palace of the Ooni of Ife, His imperial majesty, Oba Okunade Sijuade, the Olubuse II, Governor Aregbesola, while paying homage to the king, presented all APC candidates across Ife senatorial district for royal blessings.
The governor recalled his earlier visits in 2007, 2011 and that of last year, describing it as his administration’s tradition during political campaigns to make the palace as his first point of call for blessing.
He noted that the monarch’s blessing is the magic wand the APC has been enjoying and a contributory factor to the party’s victory in Osun State.
The governor charged the gathering to encourage people who are yet to collect their Permanent Voter Cards to do so, saying this is the only way to get the much desired change they have been clamouring for.
2015 polls Ogbeni Rauf Aregbesola
Share. Facebook Twitter Pinterest LinkedIn Tumblr Email