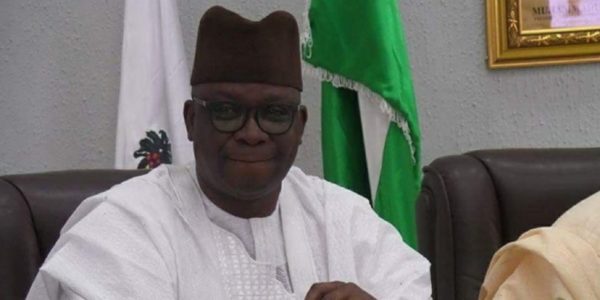 The Economic and Financial Crimes Commission on Tuesday re-arraigned former Governor Ayodele Fayose of Ekiti State over alleged N6.9 billion fraud and money laundering.
Fayose, however, pleaded not guilty before Justice Chukwujekwu Aneke of a Federal High Court in Lagos, who granted him leave to travel overseas for medical examination.
The News Agency of Nigeria reports that the EFCC first arraigned Fayose on October 22, 2018 before Justice Mojisola Olatotegun alongside a company, Spotless Investment Ltd, on 11 counts bordering on fraud and money laundering.
He pleaded not guilty and was granted bail on October 24, 2018 in the sum of N50 million with sureties in like sum.
The prosecution opened its case on November 19, 2018 and had called 13 of the 15 witnesses it listed when the Chief Judge of the Federal High Court, Justice Adamu Abdu-Kafarati, transferred the case from Olatoregun to Aneke, following a petition by the EFCC.
The witnesses included a former Minister of State for Defence, Senator Musiliu Obanikoro.
The News Agency of Nigeria reports that Fayose was billed for re-arraignment before Aneke on June 28, but the prosecution prayed the court to adjourn the case.
After the re-arraignment on Tuesday, defence counsel, Ola Olanipekun (SAN), prayed the court to allow Fayose to continue with the bail conditions granted by Olatoregun.
His application was not opposed by prosecution counsel, Adebisi Adeniyi.
Consequently, Aneke granted the application.
Olanipekun also moved a motion seeking leave for Fayose to travel to South Africa for medical examination during the court’s long vacation scheduled to start in July.
The application was also not opposed by the prosecution.
Aneke also granted the application and ordered temporary release of Fayose’s international passport.
The court, however, ordered that the passport should be returned on or before September 16, 2019.
Aneke adjourned the case until September 16 for trial.
NAN reports that the EFCC is alleging that on June 17, 2014, Fayose and Abiodun Agbele took possession of N1.2 billion for purposes of funding his gubernatorial election.
The commission said the duo reasonably ought to know that the sum formed part of crime proceeds.
The commission also accused Fayose of receiving cash payment of $5 million (about N1.8 billion) from Obanikoro without going through any financial institution.
It noted that the sum exceeded the amount allowed by law.
It also said Fayose retained N300 million in his bank account and took control of N622 million, which sums, he ought to know, formed part of crime proceeds.
It equally alleged that Fayose procured De Privateer Ltd and Still Earth Ltd to retain in their bank accounts the aggregate sum of N851 million, which formed part of crime proceeds.
Besides, the EFCC said that Fayose used N1.6 billion to acquire property in Lagos and Abuja, adding that the sum was part of crime proceeds.
It added that the former governor used N200 million, which was part of crime proceeds, to acquire a property in Abuja in the name of his elder sister, Moji Oladeji.
The alleged offences contravene the Sections 15(1), 15 (2), 15 (3), 16(2)(b), 16 (d), and 18 (c) of the Money Laundering Prohibition Act, 2011.