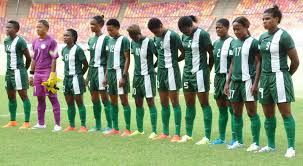 Former Nigeria international, Friday Ekpo, on Monday described the recent show of shame between the Super Falcons and the Nigeria Football Federation at the 2019 France Women’s World Cup, as an international embarrassment.
Ekpo made the observation in an interview with the News Agency of Nigeria in Lagos.
Shortly after Nigeria’s 0-3 elimination from the competition by Germany on Saturday, the players decided to remain in the hotel rooms until outstanding allowances were paid.
He said: “It’s sad that they will wait till they got to France to show their displeasure; I remember when the NFF said that they have given Falcons all that they require to succeed, why didn’t they speak up?
“If they had spoken up then, nobody will crucify them for taking this action because we will all understand that they were pushed to their limit.
“That’s nothing but an international embarrassment to all of us; everyone is watching that World Cup for Christ’s sake.
“Honestly, I believe we can do better.”
The former international noted that the situation could have been well-managed if both parties had communicated effectively.