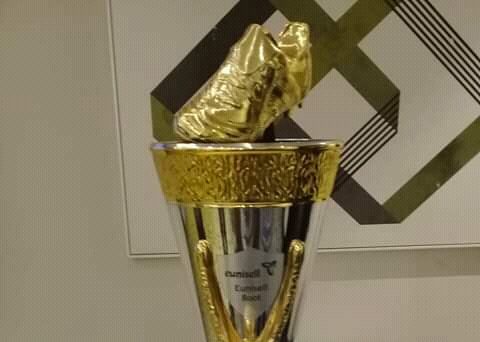 Share
Facebook Twitter LinkedIn Pinterest Email
Plans to host the second edition of the Eunisell Boot Award are in top gear.
Sponsors, Eunisell, a leading global chemical and production engineering solutions group, confirmed the ceremony will hold in June.
At the event, the top goal scorer of the 2018/2019 NPFL season, will be presented with the coveted Eunisell Boot trophy and N200,000 for each goal scored.
Junior Lokosa, the highest scorer with 19 goals in the 2017/2018 NPFL season, won the inaugural edition and was presented with N3.8 million and a glittering trophy.
The media hype around Lokosa’s award caught the attention of African Champions, Tunisia’s Esperance Sportive de Tunis, who offered the Kano Pillars striker a two-and-a-half-year contract in January this year.
Lokosa was to say after signing the deal: “It was only after I was awarded the Eunisell Boot with all the publicity around it, that my career turned around.”
According to the Group Managing Director of Eunisell, Chika Ikenga: “The Eunisell Boot was instituted not only to honour top performers, but to make players work on their game, be more competitive and to boost the profile and interest of the domestic, topflight league.”
Ikenga stressed that the initiative is confirmation of Eunisell’s commitment to the development and increased interest in Nigerian football.
He said: “Too often we lose sight of the importance of the domestic league and its players, opting instead to follow the European and UK leagues for example.
“What we forget is that a significant percentage of those talented players are Nigerians, who started their careers at home in the NPFL, and even more remarkable, is the fact that our young stars rise to the top here and abroad without having had the benefit of local academies or sponsors in their formative years.”
Eunisell extended the brand’s involvement in the domestic premier league with the launch of “Eunisell Boot” in 2018.
The company first became involved in the NPFL in 2015 when the decision was made to sponsor Rivers United FC.
Eunisell subsequently made history as the first club sponsor in Nigeria to achieve five consecutive seasons with one team.
Ikenga called on other well-meaning Nigerians, football enthusiasts and corporate sponsors to emulate Eunisell’s efforts in supporting the NPFL and players.
He said: “It’s time we got behind our own league, our clubs and players and recognise their incredible talent, and the contribution they make to the game.
“The prestigious trophy and value of the Eunisell Boot award will spur players into performing better we believe and we are indeed proud to be associated with our home-grown stars.”
An example of the impact of sponsorship on football is the popular English Premier League, which has been elevated to that of a global behemoth with the investment by Sky Sports.
Only last year, the satellite broadcaster splashed a staggering £3.58 billion (N1,682,600,000,000) for a three-year deal with rights to broadcast league games around the world.