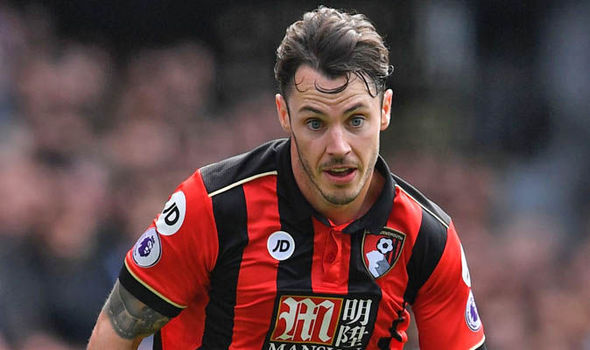 Share
Facebook Twitter LinkedIn Pinterest Email
Bournemouth have maintained their impressive recent record against Leicester City despite a late scare by running out 4-2 winners over the 10-man Foxes in Saturday’s Premier League encounter at the Vitality Stadium.
The Cherries were unbeaten in six top-flight meetings against the Foxes heading into the game and Ryan Fraser’s brace, Joshua King’s penalty and Adam Smith’s low finish saw Eddie Howe’s side build a seemingly insurmountable lead.
However, Leicester threatened a late, late comeback as James Maddison struck from the spot before Marc Albrighton nodded the ball home on 89 minutes, but it proved too little too late for the visitors.
Claude Puel’s charges would come to rue their missed opportunities as the hosts went on to break the deadlock on 19 minutes, King setting up Fraser to bear down on goal and slot beyond the reach of Kasper Schmeichel.
Leicester fought back and twice came close to getting on the scoresheet in quick succession in the 34th minute, only for Begovic to thwart the visitors both times, first keeping out Vardy’s shot before palming Maddison’s follow-up onto the crossbar.
The Cherries could have found themselves pegged back but they made the most of the reprieve by doubling their lead just two minutes later, Callum Wilson setting up Fraser to close in on Schmeichel before slotting through the Dane’s legs.
Five minutes before half time, Bournemouth were home and dry as Ricardo handled in the box to gift the hosts a penalty, which saw King step up and roll the ball to the right of Schmeichel, who went the wrong way.
Leicester could not find a way back into the game and their afternoon turned even worse when captain Wes Morgan lunged into Dan Gosling on 68 minutes to earn himself a second yellow card, leaving his side down to ten men.
From then on the outcome appeared all but settled as the south coast side notched up a fourth goal, Fraser getting to the byline and cutting back for Smith to mark his 100th Premier League appearance with a low first-time finish.
However, Leicester did manage to get on the scoresheet when Diego Rico brought down Ricardo in the area for a penalty, which Maddison successfully dispatched past Begovic on 88 minutes.
Alarm bells subsequently began ringing among the home contingent when, moments after the restart, Kelechi Iheanacho swung the ball in from the right for Albrighton to nip in ahead of Simon Francis and nod home.
However, Bournemouth were able to regain their composure and see out the remainder of the game plus injury time to clinch all three points.