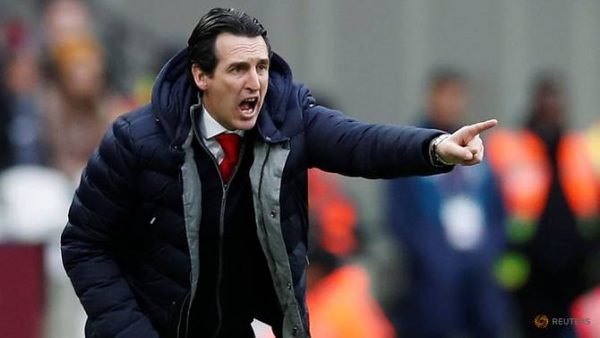 Arsenal’s inconsistency has dealt a blow to their hopes of a top-four finish in the Premier League, manager Unai Emery said following a 1-0 defeat by West Ham United on Saturday.
Arsenal, which failed to finish in the top four in the last two seasons to miss out on Champions League qualification, have 41 points, six behind fourth-placed Chelsea.
“Now, its more difficult, its clear,” Emery told reporters after Arsenal’s third defeat in six league games following a 14-match unbeaten run earlier in the season.
He added: “I think the most important thing for us is to recover our confidence and be more competitive. We need consistency over 38 matches. Now it isn’t enough at the moment.”
Arsenal have the opportunity to close the gap with Chelsea, which defeated Newcastle United last time out, when they host Maurizio Sarri’s team on Saturday.
Emery added: “The big opportunity for us is that we can take in our hands the possibility to be closer to them.
“This (Saturday’s) result makes that more difficult.”
Emery will also keep an eye on a resurgent Manchester United which drew level with them on 41 points.
United won their fifth Premier League matches in a row under caretaker boss, Ole Gunnar Solskjaer.