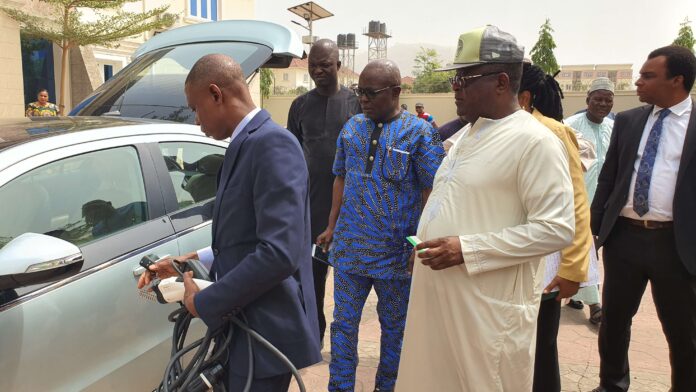 The Ebonyi State Government under the leadership of Governor David Nweze Umahi and the National Automotive Design and Development Council have expressed readiness to partner in the establishment of an electric-powered vehicle assembly plant in Ebonyi State.
The agreement was reached when Umahi played host to the Director of NADDC, Jelani Aliyu, on Wednesday in Abuja.
Aliyu explained that NADDC is at the finishing stage of certification of vehicle parts imported into the country, noting that the agency will soon start monitoring all imported vehicle parts and not allow vehicles parts in the country without certification.
The NADDC boss explained that they have started the building of an Automative Training Centre in Ebonyi State.
The centre is aimed at training the people to understand the techniques of vehicles and make them become technicians.
Aliyu called on the governor to identify areas of possible partnership.
In response, Governor Umahi explained that the Ebonyi State Government had ordered the importation of 24 electric tricycles and 24 others to be assembled in Ebonyi State.
He further noted that the Ebonyi State Government is willing to partner with NADDC to establish an electrically powered assembling plant in Ebonyi using the already imported tricycles to kickstart.
A demonstrative electric-powered vehicle was brought by the NADDC boss and was inspected by Governor Umahi.