He also hailed Elder Atose as “one of the finest leaders Delta State has seen”.

Hon. Atose added: “Elder Omonigho Atose dedicated his life to the service of the people.

“His demise is a huge loss for the entire Sapele-Okpe community.”

Elder Omonigho Atose passed on at the age of 63, following a illness.

In a statement in Sapele, the PDP leader described Elder Atose’s passing on as painful.

The former Sapele Local Government Chairman praised Elder Atose for his devotion to the family and the Okpe nation.

He said: “Elder Omonigho Atose was wise, charitable, polite and friendly. He was also a gentleman to the core, a role model and an epitome of peace and unity.”

Hon. Atose said: “Elder Omonigho Atose was a bundle of affection. He served the Sapele-Okpe Communityto the best of his ability.”

The political strategist commended Elder Atose for his uncompromising stand on the truth.

He said: “Elder Omonigho Atose was a devout Christian, an extraordinary man and an example for everyone in Okpe kingdom.”

He said the community leader played great roles in the development of Sapele.

“Elder Omonigho Atose was a great leader. His passing leaves a big void in the family and an equally formidable legacy. We’ll miss him greatly.” he said.

He led the association through a period of significant growth and achievement.

“The Sapele-Okpe Community leader will be remembered for his truthfulness, straight forward nature and uprightness,” Atose said. 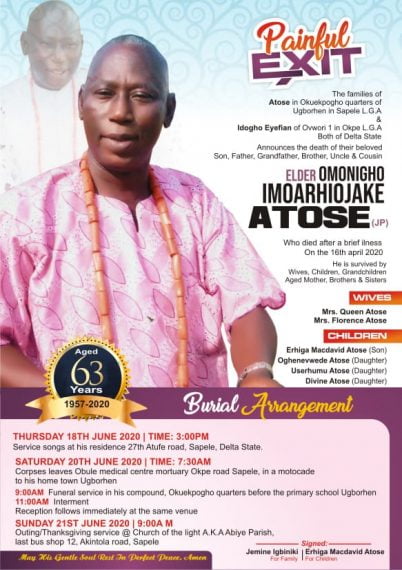 50-year-old man allegedly rapes his stepdaughter with his friend