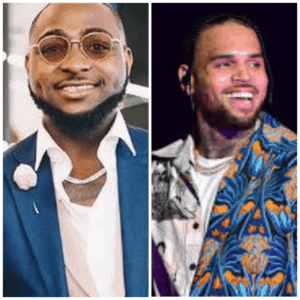 Afropop star, David Adeleke aka Davido, is set to collaborate with American pop sensation, Chris Brown on a new song, ‘Blow My Mind’.
Brown is an award-winning singer and actor who has sold over 100 million records worldwide, making him one of the world’s best-selling music artists.
Throughout his career, Brown has won several awards, including a Grammy Award, 15 BET Awards, four Billboard Music Awards, and six Soul Train Music Awards.
According to Billboard, Brown has the seventh most Hot 100 entries on the chart with 93.
News Agency of Nigeria reports that Davido announced the upcoming song on his instagram page @davidooffical on Thursday.
Sharing the artwork for the tune, he wrote, “Verified. Coming soon!”
NAN reports that Davido, who has been on an international tour, has broken several records in recent times.
He was the first Nigerian artist to reach 1 million, 2 million, 5 million and 9 million followers on Instagram.
His 2017 hit song, “Fall” became the first Nigerian music video to hit 100 million views on YouTube.
The Daps-directed video had made Nigerian YouTube history as the most -viewed Nigerian music in recent times.
Also, his song, ‘Wonder Woman’ was listed as one of the hottest tracks from across the African continent by Apple Music.