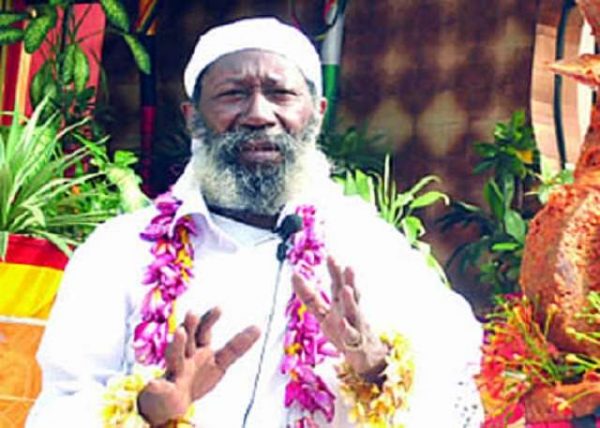 Satguru Maharaj ji, the Founder of One Love Family sect, has canvassed the adoption of traditional oath taking for all political officer holders to curb corruption.
Addressing journalists on Tuesday in Ibadan to mark the 37th anniversary of the establishment of the Maharaj   ji sect in Nigeria, the self-styled perfect living master said ‘official corruption’ would reduce drastically if this was done.
He said: “Corrupt politicians will continue to go scot free in as much as they are not mandated to take oath by the god of thunder during their swearing-in.”
Maharaj ji blamed the country’s present socio-economic challenges on the desperation by many Nigerians to acquire wealth.
He advised Nigerians to diligently work for the money they earn rather than engage in embezzlement of government funds, robbery, kidnapping, money ritual and others illicit deals.
Maharaj ji also said that there would be no war in spite of the agitation for the breakup of the country in some quarters and quit notice issued by some youths to non-indigenes.
He said: “My existence in Nigeria is not to support anybody but for the overall good of the country.
“I have declared that there will be no war in Nigeria despite agitation for break up and quit notice in some parts of the country.’’
The sect leader also advised civil servants not to rely solely on their salaries but look inwards and evolve alternative sources of income.
He said that with the present state of the economy and the meagre salary paid by government; hardly could any individual or family survive.
The sect leader said that the solution was for Nigerians to take up farming in order to be self-dependent.
He said: “If you have two hectares of land and plant pepper, you will be a millionaire before the end of the year.
“To my understanding, Nigerian farm produce is the best compared to the one imported from other countries and this can be improved upon by engaging more people in agriculture.
“In America, rich people can be found among farmers and this can be achieved in Nigeria by changing Nigerians’ orientation of relying solely on government job.
“Nigeria can reduce its unemployment rate by changing the orientation of the youths who desperately look for government job.”
Maharaj ji further said that corruption was paramount in Nigeria because the country had neglected its rich cultural heritage.