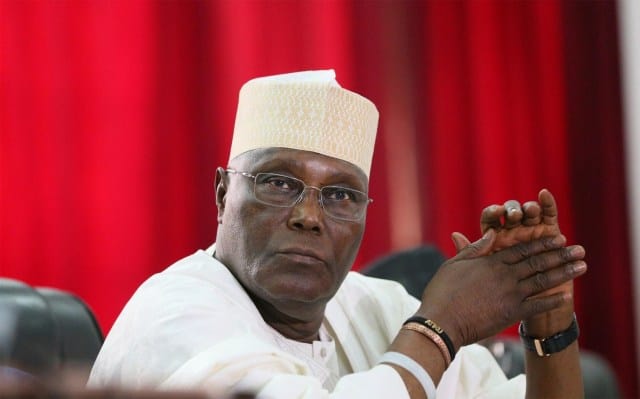 Since former Vice President Atiku Abubakar declared that one of his sons, Mohammed, has tested positive for Coronavirus Disease (COVID-19), there have been different versions of what transpired, with many leveraging the social media to attack the presidential candidate of the Peoples Democratic Party for the 2019 elections.
The Eagle Online’s investigation, however, showed there are several incorrect information and outright falsehood in the legion of allegations made by social media users in the case of Mohammed Atiku Abubakar, who is referred to as Mo Atiku Abubakar.
Information available to The Eagle Online did not indicate that Mo was in the United States as claimed by some of the social media users.
Rather, he was in the United Arab Emirates between March 7 and 10, 2020 and Switzerland on March 15 and 16.
In between the UAE and Switzerland, he visited France.
All the trips in Europe, The Eagle Online learnt, were business related.
This was also confirmed by the Team Lead at the Atiku Abubakar Media Organisation, Mazi Paul Ibe, in a statement on Monday.
Ibe said: “The clinical case returned to the country on 17th March via Switzerland from some business engagements in France and Switzerland.”
Available information had it that Mo flew with Emirates Airlines throughout his journey, arriving in Nigeria, via the Murtala Muhammed International Airport, Lagos, on March 17, 2020.
Like other passengers, Mo was screened by health officials on arrival at the airport.
Sources said he was driven to his house on the Island in Lagos on arrival.
He then attended a scheduled meeting, said to have had less than 10 persons, before heading to his Abuja home at Taslee Palm City Estate, Plot 475, Uruguay Street, Maitama on March 18, 2020.
It was on the trip home on a Aero Contractors flight that he met the Bauchi State Governor, Bala Mohammed, who has since gone into self-isolation.
On arrival in Abuja, sources told The Eagle Online that he contacted the Nigeria Centre for Disease Control to report that he just returned from a trip to countries where COVID-19 figure had topped 1,000.
Sources in the NCDC, who confirmed the development, said he was advised to self-isolate since he remained asymptomatic at the time.
That was the situation until he tested positive to COVID-19 and was picked up by a team of the NCDC at about 1am on Sunday.
Confirming this part of the finding by The Eagle Online to The PUNCH, the Vice Chairman of Taslee Palm City Estate, Zakari Aliyu, said it was not impossible for those alleging that Mo had been traversing Abuja since his arrival, including going to a night club and attending Jumat, not to know that three of the former Vice President’s sons stay in the estate.
Aliyu said in the case of Mo, who is married to Badriyya, the daughter of a former Governor of Bauchi State, Ahmed Muazu, there was no need for residents of the estate and those of Abuja to panic.
He told The PUNCH: “The man was taken away by the NCDC around 1am.
“He tested positive but his wife and children all tested negative.
“However, they are all on self-isolation for the 14-day window and I commend the wife for cooperating with us.
“There is no cause for panic.
“If his immediate family has tested negative, then it is unlikely that anyone else in the estate has it.
“The truth is that Atiku has three sons in our estate.
“Also, our estate is big and the houses are well spaced.
“It is possible that there is some malice as regards the news being spread on social media.
“Also, it is not true that the estate reported the man.
“We had no hand in it.
“The CDC came to convey him to the isolation centre.”
Also during his interview with The Punch, Aliyu said it was incorrect that Mo participated in any Friday prayer as being widely circulated.
There had been several reports on the social media indicting Mo for allegedly behaving irresponsibly since his arrival from his trip abroad.
A source told The Eagle Online: “As a matter of fact, the guy was irresponsible.
“He had been sick right from when he returned into the country, refused to self isolate, went visiting places and people and had to be forcefully taken to the hospital.
“The father only announced it when it was inevitable it can no longer be hidden.
“The managers of estate where he lives are really mad at his behaviour.”
Soon after these information filtered into the social media space, officials of the NCDC checked from the management of Play Lounge night club, where Mo was alleged to have gone clubbing on Friday, to confirm the allegation.
The club, however, denied the claim of Mo’s presence at the club on Friday.
Mohammed has been moved to the isolation centre of the University of Abuja Teaching Hospital, Gwagwalada.