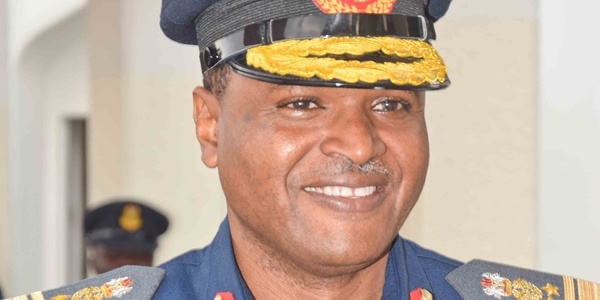 Share
Facebook Twitter LinkedIn Pinterest Email
The Chief of Air Staff, Air Marshal Sadique Abubakar, on Tuesday organised a feast to celebrate the Christmas for officers and personnel engaged in the war against Boko Haram insurgents in the North East.
The grand Christmas lunch was held at the Nigerian Air Force 105 Composite Command, Maiduguri.
Abubakar, who was represented by AVM Muhammad Muhammadu, the Chief of Policy and Plans, NAF Headquarters, said the gesture was to enable the personnel celebrate the season in a happy mood.
He said: “It is our tradition to host celebration of festive season for officers and personnel to foster comradeship and appreciate your efforts in the war against insurgency.
“I commend your sacrifices and urge you not to lose focus; maintain high vigilance and combat readiness throughout the festive season.
“Our objective is to ensure lasting peace in the Northeast and the country at large.”
Abubakar lauded President Muhammadu Buhari over his support and provision of equipment to the service.
The air chief reiterated the commitment of the service to be disciplined and professional in the discharge of its constitutional mandate.
AVM James Gwani, the Air Task Force Commander, Operation LAFIYA DOLE, explained that the feast was part of the CAS’s commitments to improve the welfare of the personnel.
Gwani added that the gesture demonstrated NAF’s leadership commitment to giving the personnel a sense of belonging and improvement of their well being to boost their morale.
According to him, the Christmas lunch is designed to enable personnel who are away from their families to celebrate the season in a happy and joyous atmosphere.
Gwani reiterated the commitment of the service to defeating Boko Haram insurgents and restoration of peace to the region.
Also, Wing Commander Muhammad Umar, the Commander, 105 Composite Command, commended the CAS over his commitment to the improvement of personnel welfare.
Umar disclosed that the NAF authorities had approved the construction of additional 30 blocks of apartments for service men and women, and another 10 bedroom apartments for officers as well as religious places of worship in the command.
He noted that a number of viable projects, including office and house accommodation as well as equipment, were provided in the command to enhance its campaign against the insurgents.
Some of the servicemen and women expressed joy over the feast organised to enable them celebrate the season, adding that it gave them a sense of love while they were at the frontline.
The event was attended by senior military officers, representatives of the police, security agencies, Civilian Joint Task Force, community and religious leaders.
Boko Haram Muhammad Muhammadu north-east Sadique Abubakar
Share. Facebook Twitter Pinterest LinkedIn Tumblr Email