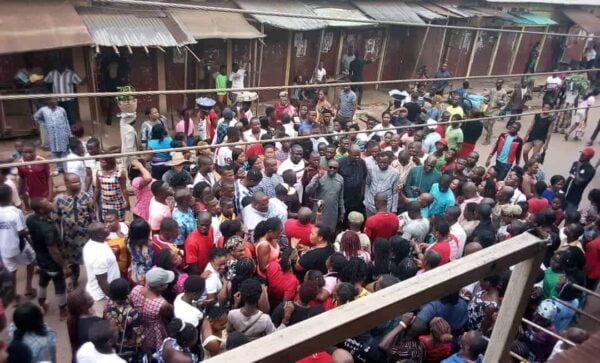 Business activities in Abakpa Main Market, Abakaliki, Ebonyi State was on Monday morning disrupted following a protest by some traders over alleged unwarranted interference in their choice of leadership by the State Government.
The State Government had on Friday night announced the removal of the Chairman of the market, Christopher Eze, on account of alleged misappropriation of funds and directing him to hand over immediately to the Special Assistant to Governor David Umahi on Market Development.
The traders, who were not comfortable with the development, shut their shops and carried placards with various inscriptions signifying solidarity with Eze, noting that the action of Government was done in bad faith against the chairman for being on the side of the traders.
The traders also blocked major entrances to the market obstructing human and vehicular movements.
Some of the placards they displayed read: We say No to SA; Our Market is peaceful, we don’t want SA on Market; Our market is peaceful, we love your good work our digital Governor.”
Speaking to The Eagle Online, few of the traders expressed mixed feelings over the development, alleging that the suspended chairman refused to hand over as directed, thereby instigating the crises by directing them to shut their shops.
However, most of the traders condemned the action of Government, alleging that the tenure of the chairman had not elapsed, being elected about a year ago.
They emphasized that the suspended chairman was a peaceful man, adding that there were no crises in the market and its leadership before now.
Some of them further revealed that Eze was removed by the State Government because he has refused to comply with some demands of the government considered inimical to the traders.
According to them, the chairman had supported the traders against Government’s move to forcefully relocate them to the new Margaret Umahi International Market, which shops were made too exorbitant for the traders.
Also, he had refused to constitute a task force to collect certain taxes from traders for the government.
One of the traders, Ogbonnaya Eze, revealed to our correspondent that the incident all started on Friday when they had a peaceful meeting with the SA on Market on issues pertaining to the affairs in the market.
He said: “The meeting ended peacefully, but unfortunately that same Friday night, it was announced on radio that the chairman has been sacked and was to hand over to the SA on Market.
“The next day, the chairman was locked out of the office without any prior notice from the government or from the SA on market.
“The chairman is a peaceful and honest man, who has always coordinated the affairs of the traders well.
“I appeal to government to reveal to the traders the reason for the sudden change of leadership in the market, as the chairman’s tenure has not elapsed and cannot be sacked since his position was based on election and not by appointment.
“As much as I know our chairman, he is very genuine, an honest man and cannot do what the government has levelled against him.
“If they have any proof of misappropriation of fund, they should bring it to the market.
“We have executives: the government should verify first with the executives, let us know what our chairman has committed with proof before removing him.”
Meanwhile the State Commissioner for Internal Security and Border Peace, Stanley Okoro Emegha, who promptly intervened to restore order in the market, explained that Eze was suspended following his recalcitrant behaviour: refusal to obey government’s directive to hand over to the new leadership.
Emegha added that the embattled Chairman was also accused of financial misappropriation, which led to his suspension and the appointment of a new leadership by the government.
He further confirmed that Eze has been arrested by the police to explain why he chose to cause public nuisance in the market contrary to the peaceful disposition of the State government.
Emegha said: “There is an uprising and the leadership of the market changed.
“The market chairman was supposed to hand over to the new chairman but he is having problems handing over.
“But it has been controlled.
“The traders said the chairman ordered them to close their shops which was not right.
“That is why he has been apprehended and he is under police custody now.
“He has no such right at all to ask for the closure of market.
“Most of the traders are still taking instructions from the former chairman and that is why they refused to open their shops.
“He has no such right to stop the people from opening their shops.
“He is not government.
“The chairman was never impeached.
“He was suspended based on misappropriation.”
Emegha however later confirmed to journalists in his office that the embattled chairman had been released after due interrogations by the Police, warning that the government would not condone any attempt by anyone to truncate the prevalent peace in the State under the present regime.
Meanwhile at the time of filing this report, Eze could not be reached for his reactions.