Super Eagles skipper, John Mikel Obi, and Samuel Kalu have been listed for this afternoon’s final group against Madagascar at the ongoing African Cup of Nations in Egypt.
Mikel returned to the starting line up after missing their 1-0 win over Syli Nationale of Guinea on Wednesday, while Kalu has fully recovered from dehydration he suffered on the eve of the tournament.
Goalkeeper Ikechukwu Ezenwa also made the cut and will be provided cover by Chidozie Awaziem, Ola Aina, Leon Balogun and William Troost-Ekong.
In the midfield, Israeli-based John Ogu will earn his AFCON debut and is teamed alongside Oghenekaro, John Obi Mikel and Samuel Kalu.
The duo of Ahmed Musa and Odion Jude Ighalo will lead Super Eagles charge for goals in the attack.
The Substitutes are Daniel Akpeyi, Francis Uzoho, Kenneth Omeruo,Wilfried Ndidi, Henry Onyekuru, Moses Simon, Paul Onuachu, Samuel Chukwueze, Victor Osimhen and Alex Iwobi.
The tie kicks off at 5pm Nigeria time. 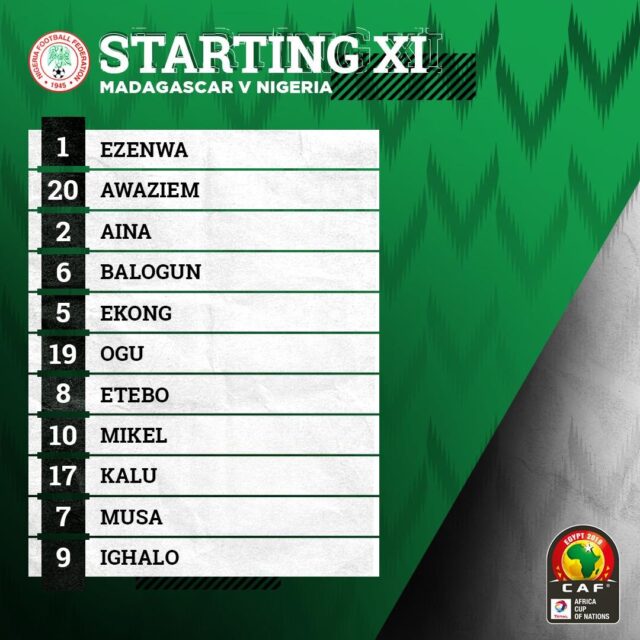