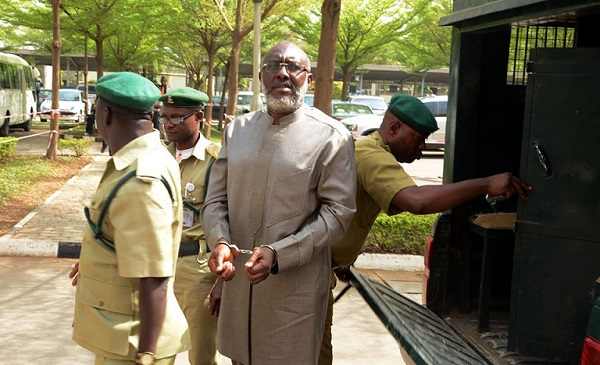 A former National Publicity Secretary of the Peoples Democratic Party, Olisa Metuh, has been sentenced to 39 years imprisonment for corruption.
Metuh was jailed on Tuesday by Justice Okon Abang of the Federal High Court in Abuja following his prosecution by the Economic and Financial Crimes Commission over monies he was said to have received from the Office of the National Security Adviser in the countdown to the 2015 elections.
He was tired and convicted on seven count charges.
He was accused of fraudulently receiving N400 million from the Office of the National Security Adviser in November 2014.
He was said to have used the money for political activities of the PDP and for his personal purposes.
Justice Abang jailed Metuh seven years in respect of counts 1, 2, 4 and 7; five years in respect of count 3; and three years in respect of counts 5 and 6.
The sentences are, however, to run concurrently.
He is thus to spend seven years in prison.
Justice Abang also ordered Metuh to pay a fine of N375 million to the Federal Government.
Destra Investments is also to pay N25 million to the Federal Government and the accounts of the company with Diamond Bank and Asset Resource Management to be closed and their proceeds forfeited to the Federal Government.
Metuh was arraigned by the Federal Government in 2016 over allegations of unlawfully receiving N400 million from the office of the then National Security Adviser, Colonel Sambo Dasuki (retd).
Metuh was prosecuted alongside his company, Destra Investment, on a seven-count charge of diversion of the money received from Dasuki.
The former PDP spokesperson was also accused of transacting with the sum of $2 million without going through a financial institution in violation of a provision of the Money Laundering (Prohibition) Act.