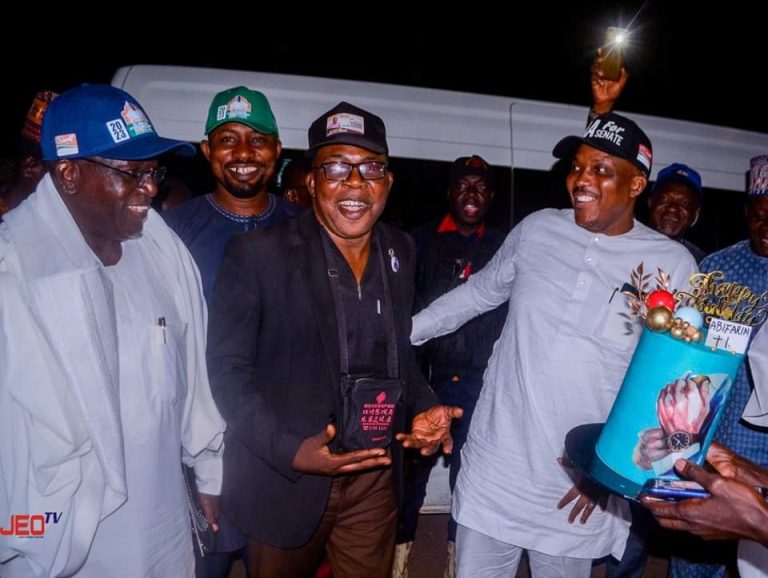 The gubernatorial candidate of the Social Democratic Party in Kwara State, Alhaji Hakeem Lawal, has felicitated with his Director of Media and Strategic Communications, Oluwasegun Abifarin, on the occasion of his birthday.

The celebration took place on Saturday at the campaign office of the party along Agba Road, GRA Ilorin.

It saw Alhaji Lawal present a beautiful cake to the celebrant and taking photographs with Abifarin and his media team.

The celebrant also received prayers from the gubernatorial candidate and goodwill messages from party chieftains present, including Alhaji Adamu Manko, the SDP candidate for Kwara North Senatorial District, and Dr. Bolaji Afolabi, the Secretary of the Campaign Council, among others.

After his service year in 1992, Abifarin was part of the pioneer staff at Promptlink Limited, publishers of Labour Mirror of the Nigerian Labour Congress.

After a while, he desired to be part of the pioneer team at the TheNews magazine as a Reporter Researcher in 1993

When the late General Sani Abacha jackboot was becoming too heavy, Abifarin stepped aside from journalism and joined the Danish-Nigerian Chamber of Commerce as the Executive Secretary.

He almost caused a diplomatic row between Nigeria and Denmark when he issued a press release condemning the execution of Ken Saro-Wiwa, the Ogoni Rights activist, by the Abacha junta.

But the journalism in him will not allow him as he left for Financial Standard Newspaper, from where he later joined The Week Magazine with Simon Kolawole, who is now the Publisher of The Cable.

Though Kolawole later left for Thisday, Abifarin stayed back and rose to become the Editor of the magazine.

From The Week, he moved to The Source magazine, from where he left for a stint in TPT, an International PR firm, as Head of Media and Strategy.

It was after this that he decided to start his own online news magazine: Newsroom Nigeria at: www.newsroomnigeria.com.

Armed with a Bachelor’s and a Master’s degree in Mass Communication, Abifarin is a professional journalist who knows his job.

He is a member of the Nigerian Union of Journalist, Nigerian Guild of Editors, Guild of Online Editors, GOME and African Center for Investigative Journalism.

The SDP/Hakeem Lawal Media Director was also the Publicity Secretary of the Kwara Development Foundation that participated fully in the Otoge revolution of 2019 in Kwara State.

He was also the Editor of Kwara Chronicle, a publication of KWADEF.