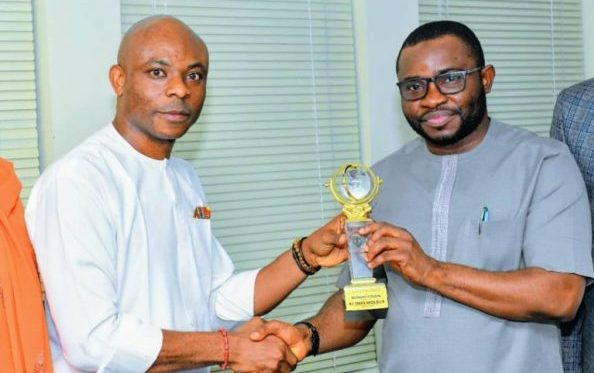 The FCT Council of the Nigeria Union of Journalists has bestowed on Governor Yahaya Bello of Kogi State the “Torch bearer of Security” award.

The award, according to the union, sees Bello emerging as the best governor in ensuring security among his colleagues in the country.

Representatives of the FCT Council of the NUJ, led by its Chairman, Emmanuel Ogbeche, gave Bello the award on Saturday in Abuja.

Ogbeche lauded Bello for securing the state and the lives of residents as well as commuters passing through the state.

He said as the fourth estate of the realm and watchdog of society, the NUJ had recognised all the efforts of the governor and had deemed it right to honour him.

He said: “We are here to recognise your outstanding performance in security.

“We remember sometime in February 2017, the primary security agency, the Nigerian Police Force, recognised your performance.

“They bestowed on you the award of the best governor in security.

“You are fully aware that Section 22 of the Nigerian constitution says that media will hold anyone accountable to the people and by interpretation, it also means that when those in government have performed well, they ought to be given a pat on the back.

“We want to commend you that you have kept faith with one of the primary reasons of being in government which is the security of the people as enshrined in Seccton 14 of the constitution.”

Bello, who was represented by his Chief of Staff, Abdulkareem Asuku, thanked the NUJ for recognising the governor for his achievements in the security sector.

He said the priority of Bello was securing the lives of Kogi citizens and other Nigerians, adding that this was the reason Nigerians were calling on him to run for president in 2023.

He said: “Security is the number one responsibility of any responsible government.

“Without security, no matter the infrastructure or economic achievement of any government it will all amount to nothing.

“That is why his Excellency, Governor Yahaya Bellom upon assumption of office in 2016 decided to take the security of the people of Kogi State as his number one priority in his agenda.

“That is why the good people of this country who  know that for Nigeria to survive beyond 2023, we just have to take it from where we are now in security to where we can raise our heads high and be proud of our nation.

“But for us to move from this situation to something better the good citizens of this country have resolved and are calling on his Excellency to present himself to salvage the situation in the country.

“I want to specifically appreciate NUJ Abuja chapter for recognising his Excellency to be fit and able in that capacity to serve.

“Because it is one thing to achieve and another thing to be recognised.

“Not just by anybody but the mouth piece of the nation which is the NUJ.

“For you to deem in fit to recognise the achievements of Governor Yahaya Bello in security is a big one and we appreciate you.”

Asuku also urged the NUJ to keep doing its best in upholding the unity of the country through credible reportage.