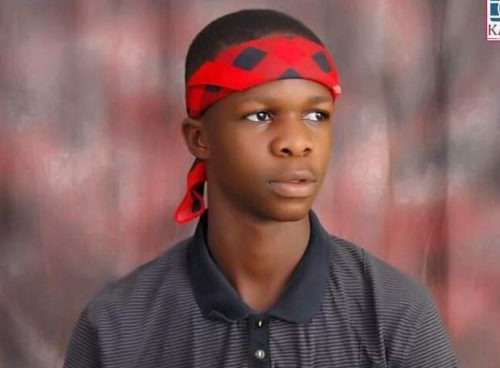 Adebambo Similoluwa Emmanuel, Yung Clef, is a promising music talent gradually making waves. The ambition of the 16-year-old Senior Secondary School student who sings Afropop is to reach the very top of his music career. In this interview, he speaks on how he came into music at a tender age and his exploits so far.

What’s your full name and how old are you?
My name is Adebambo Similoluwa Emmanuel and I am 16 years old.

How and when did you start playing music?
Singing to me is natural. I started music when I was in primary school, but I started going to the studio to record songs when I was in SS 2.

How do you combine playing music with going to school?
I try as much as possible to manage my time very well.  When it is school time, I get busy with my studies.  I give my studies the needed attention. But you know, it is not all the time that one gets down to reading.  At my leisure time, I work on music.  At times, it is not easy combining both, but somehow, God has been helping me, and with good management of my time, I find myself doing well in both. I have had to miss school at some point, but those times I missed school were not crucial times.  Those were the times I had shows to attend.  They were very very few occasions.  But I make sure I get the notes of the classes  I missed and catch up very fast.

How many shows have you attended so far and which was would you say is your biggest?
I’ve attended up to ten shows and my biggest show so far was the one at Government House in Ogun State, on December 5, last year.  It was an award for excellence.  I performed and everybody was thrilled.

That could not have been for free.  How fat was the package?
I was not particular about the money.  Or at least, at this state, money is not the most important thing under consideration.  It is about fulfilling a dream, doing what I enjoy doing and seeing people showing excitement.  It was an opportunity to exhibit my talent and make connection.  You don’t know who would witness the show and be useful to you in future.

How thrilled would you say were the audience?
When I was called to perform, many were not expecting a young boy like me. Until I mounted the stage, not many obviously believed I was the one invited to sing. I performed and at a point, the audience could not but dance to my music. They were obviously thrilled and I felt good. One thing I must say is that I learn from my performances at every show.  I am just emerging, so I still have to learn so many things to perfect my act in the area of stage performance and so on.  I am improving by the day and very fast too.

How did you inform your parents about your interest in music?
It was not a very direct thing. I started from writing of music.  I had up to seven exercise books containing my songs.  At different times, my mummy would tell me I was doing rubbish each time she asked and I told her I was writing songs. She once told something like, you cannot be a musician so, why waste your time on it. There was a particular time I sold my play station and was able to raise about N5,000.  My mum sent me on errand one day and I met one D.J. He is late now.  I told him about my interest in music and would be glad if he could help so that I could record some stuffs in the studio.  I also told him to help talk to my mum to get her support. He met my mum, they discussed and my mum did not give her full support. But at least, I could go into the studio and do my songs.  During the session in the studio, the DJ was surprised at my performance and asked if I’d been recording before, and I said no.  He almost could not believe it. After leaving the studio, I played the recording for my mum and she was amazed.  She could not believe I could sing that well. When my dad came back, I told him about everything, how I raised the money for the recording in the studio.  When I played the song, my dad also asked the same question: Did you sing this?! He was impressed. The DJ came to our house the next day on the invitation of my dad. They talked. After that, he became my manager. My dad gave him money for promotion and the stuffs.  I started attending shows and meeting so many people in the industry.

Did your father give any advice, having known that you are going into music?
Yes, he told me to focus on my music and not be wayward in any way, and that I should at the same time face my education.  He said I should take decisions on my own and not be influenced by any negative advice anyone might give me.

Do you play any instrument?
Not yet. I’ve tried guitar, but my trainer suddenly disappeared.  But I am planning going back to learning guitar and other instruments, particularly piano.

Have you been attending any music lesson?
No. As I had said, it comes to me naturally.

How many songs have you recorded?
I have 17 songs recorded and about 17 not recorded.

What kind of music do you play?
I play Afropop.

I listened to one of your songs where you sound like Olamide. Is that Afropop too?
No, that is Afro shakushaku.  I did that for the purpose of giving the people what they want.  That is what is in vogue now and I feel I should just give it to them.

When do you plan to release your album?
I may release my album at the end of this year.

Who is your favourite Nigerian musician?
I don’t have a favourite musician.  I listen to every musician irrespective of whatever genre of music they play.  I don’t like to restrict myself.  I enjoy music in general and listen to all, especially as long as the music they play is good.

If you are given the opportunity of meeting one great Nigerian musician, who would that musician be and why?
That person will be Davido. Davido is a unique guy. I love his lifestyle and the fact that he helps others.  From my understanding of his lifestyle, he is the kind of person that loves those around him and inspires them, especially the young ones.

Any other musician you like to meet apart from Davido?
Yes, Wizkid.  I would love to meet him.

How do you get the inspiration to sing?
At times I am inspired when I listen to good music.  At times, too, the inspiration comes naturally.  Remember I told you that I said music is a natural thing with me.

What kind of encouragement do you expect from established artistes?
Well, I think the best way they can help the young ones is to mentor them, organise competitions to develop talents and mentor them.  That, to me will go a long way in helping the young ones.  It will help in developing talents that, if not assisted, would die undiscovered.

How did you come about the name, Yung Clef?
I was given the name by Adeyemi Praise.  Praise is that my senior in school that I said encouraged me. In one of our interactions in school, after he listened to one song I wrote, he asked what name would I bear as an artiste and I told him I did not know.  He said I should give him some time that he would come up with one. Soon after; about two hours after, he came up with Yung Clef. I felt good with the name and that has stuck.  Many know me by the name in school and all around.

Does your school know about your singing talent and the fact that you are pursuing a career, so to speak?
Yes. They know very well in school and they encourage me.  My teachers and my mates all encourage me.  My fame has even gone beyond my school.  Many students in the schools in my area know Yung Clef.  At times when passing bye, many would call, Yung Clef!

Have you at anytime performed in your school?
No, not yet.  I know however that before I leave secondary school, I will perform. It could be during our valedictory service. I also like to organise a mini concert in our when we resume fully.

What advice do you have for young ones like you who like to go into music?
My advice is that they should never relent in their efforts. They should never give up.  They should know that no one is perfect, hence the need to continue to strive towards perfection.  They should do everything to improve themselves in all ways.  Hard work is very necessary and with prayer, success is assured.

What advice do you have for parents who have young ones like you?
There are parents who don’t want to imagine that their children are going into music. I have some friends who have complained of their parents not allowing them or even giving them the opportunity to express themselves.  Such parents should give the young ones the opportunity to express themselves.  They should allow them to live their dreams.

How far do you plan to go in music?
I want to go beyond all expectations! By the grace of God, I want to get to the very top.