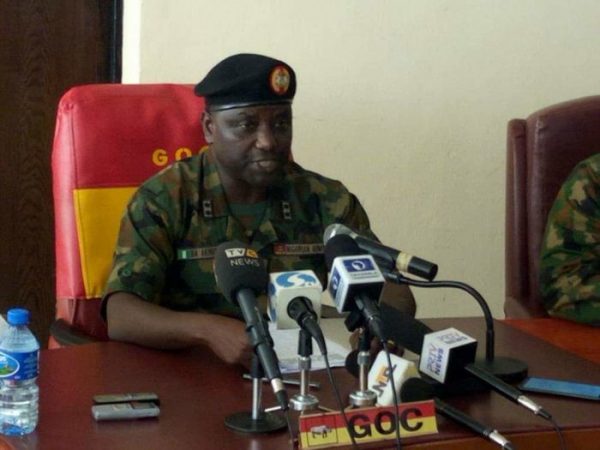 Share
Facebook Twitter LinkedIn Pinterest Email
The theatre command of Operation LAFIYA DOLE has tasked troops to sustain high combat spirit to end Boko Haram insurgency and restore peace to the North East.
Major General Benson Akinroluyo, the Theatre Commander, made the appeal when he visited the troops
Colonel Onyema Nwachukwu, the Deputy Director, Army Public Relations, Operation LAFIYA DOLE, announced this in a statement on Sunday.
Baga is in Kukawa Local Government Area of Borno State.
Akinroluyo conveyed a special commendation message of the Chief of Army Staff, Lieutenant General Tukur Buratai, to the courageous troops over the defeat of the terrorists.
The Commander also praised the gallant troops for the reclaiming Baga and the adjourning communities.
He said: “The COAS is particularly pleased with recent victory over the insurgents and the operational successes in the general area of Baga and the adjoining villages.
“I urge you to be relentless and decisive in combating the insurgents, no inch of Nigerian territory should be occupied by the terrorists.
“I also enjoin you to sustain the tempo of the operation and maintain high morale to consolidate on the successes so far recorded in the clearance operations.”
Akinroluyo reiterated the commitment of the military authorities to the improvement of the troops’ welfare, noting that the Army’s leadership accorded priority to their welfare.
He said the troops wounded in the ongoing operations were receiving adequate medical attention and wished them quick recovery.
NAN also reports that Akinroluyo was, during the visit, accompanied by Major General Moundhey Ali, the Commander of the Nigerian Army Special Forces Command.
'Operation Lafiya Dole' Benson Akinroluyo north-east
Share. Facebook Twitter Pinterest LinkedIn Tumblr Email