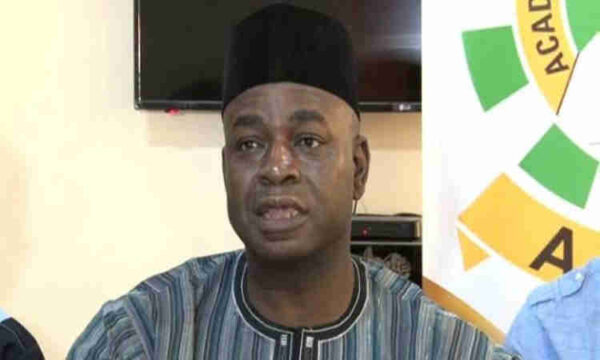 The Academic Staff Union of Polytechnics on Wednesday called for full implementation of the Federal Polytechnics endment) Act, 2019.
National President of the union, Usman Dutse, made the call at the opening ceremony of the 15th National Delegates Conference of ASUP held at the Federal Polytechnic, Ilaro in Ogun.
The News Agency of Nigeria reports that the conference which kicked off on December 4 would last till December 7.
Dutse said that the Act, which was signed by President Muhammadu Buhari in June, had not been fully implemented.
He said that barely six months after the Act was signed into law, not much had been achieved.
“You can see how the Federal Government put pressure on us on IPPIS issue; if it is their interest, they will put pressure.
“Some Rectors had forced the union members to be enrolled in the scheme, but this act that will benefit the system and workers, has not been implemented.
“Now, there is a letter from the ministry, forwarded by NBTE, that some provisions of the act should not be implemented until next year.
“That is why we are asking, why the alteration? They altered other areas, and they said the council should remain till next year.
“We are not against the council being delayed till next year, but there are some council members that the act has removed.
“We want them to know that there is need for them to take action in that regard,” he said.
The ASUP president said some of the lingering issues would be discussed at the business sessions at the ongoing conference and take position as NDC was the highest decision making body of the union.
“Our delegates are here, our NEC members are here and LOC are here, we will look at the issues and take a decision,” Dutse said.
He urged the Federal Government to be up and doing, and as well attach much importance and attention to technological education.
According to him, in their speeches, they praised and talked about technical education, but when it comes to funding and attention, the sector received the least.
In his remarks, Dr Masa’udu Kazaure, Executive Secretary, National Board for Technical Education commended the foresight of the union in accepting the government’s policy on IPPIS.
Kazaure, represented by Dr Olusegun Aluko, Rector, Federal Polytechnic, Ilaro, described the union’s stance as patriotic and commendable.
The executive secretary said he was of firm belief that ASUP would have no cause to regret its action.
“From the records, ASUP elections are democratic and rancor-free, which manifests in the excellent fellowship.
“It is my fervent prayer that this NDC will not be different,” he said.
Kazaure congratulated the outgoing leadership of the union for a successful tenure.
He said that their reign had redefined ASUP/Government relationship.
Kazaure also commended the union for its doggedness in the actualisation of the amendment of the Federal Polytechnic Act.
He said similar approach was used by the union to get the government to sign the Memorandum of Settlement, which paved way for NBTE to review its normative instruments, compelling proprietors of institutions to regular payment of salaries and allowances.
Also, Prof. Abubakar Sadaoki, urged management and governing council of various polytechnics to find a common ground with the union for peace to reign in their respective institutions.