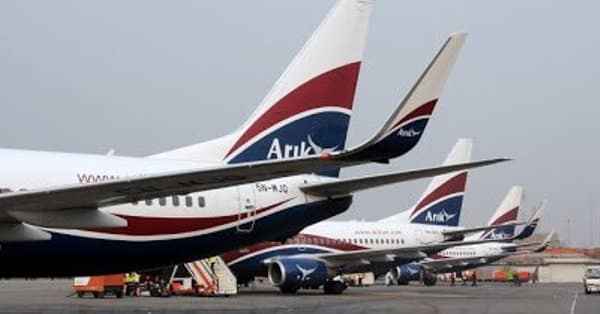 Arik Air says it has reinstated flights to Osubi Airport, Warri and Gombe Airport and moved all Port Harcourt bound flights back to Murtala Muhammed Airport Terminal 2 with immediate effect.
Arik Air’s Communications Manager, Adebanji Ola, confirmed the development in a statement issued on Monday in Lagos.
Ola said the reinstatement of the flights followed the suspension of an earlier decision by the Federal Airports Authority of Nigeria’s to withdraw Aviation Security, firefighting and rescue services to the airports.
Ola said: “Arik Air regrets any inconvenience the earlier closure of the three airports may have caused its esteemed customers.
“The airline assures customers of a hitch-free operation this festive season.”
The News Agency of Nigeria reports that FAAN had in a Notice To Airmen stated that it would be withdrawing Aviation Security, firefighting and rescue operations the airports effective from midnight December 9 over alleged indebtedness.
However, the General Manager, Corporate Affairs FAAN, Henrietta Yakubu, confirmed to NAN on Monday that negotiations had resumed between the agency and the management of the affected airports.