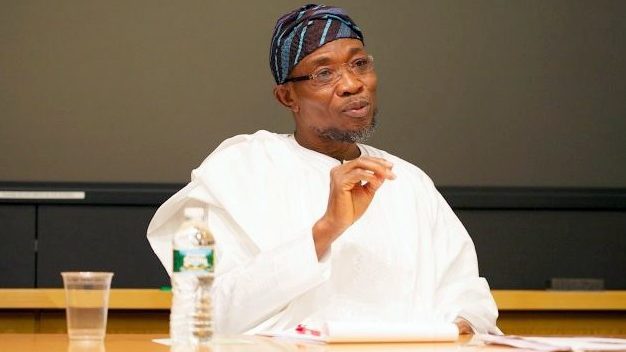 Governor Rauf Aregbesola has installed an electronic beam indicating a daily countdown to the November 17 expiration of his tenure as Osun governor.
The News Agency of Nigeria reports that the beam, conspicuously installed at the reception hall in the governor’s office in Oshogbo, indicates on daily basis, the number of days left for the governor to spend in office.
NAN reports that when the Minister of Information and Culture, Alhaji Lai Mohammed, paid the governor a courtesy visit in his office on Monday, the countdown indicated 191 days.
Specifically, the beam reads: “191 days Home Run Countdown”, meaning the governor and his cabinet has 191 days to the end of their tenure and to vacate the office.
Speaking to NAN on the countdown beam, Ismail Ademola, the Special Adviser to the governor on Wealth Creation, said it was meant to bring to the consciousness of every member of the cabinet that the administration was winding up.
He said it was also meant to further spur them to intensify speedy delivery of democracy dividends to the people of Osun.
Ademola who noted that everything that has a beginning must have an end, added that the administration had performed creditably despite all odds.
He said Osun had been witnessing sparkling infrastructure and socio-economic development since Aregbesola took over as governor.
It will be recalled that Aregbesola of the All Progressives Congress took over the mantle of leadership of Osun on November 27, 2010.
The governor was also sworn in for a second term in office on Thursday November 27, 2014 at the inauguration which held at the Osogbo Township Stadium.
Meanwhile, the Information and Culture Minister who was in Oshogbo for the commissioning and inspection of some Federal Government projects described Aregbesola as his “co-traveller’’.
Mohammed said his political career and that of Aregbesola intertwined decades ago and they had been in the same political stream since then.
He said: “I was quite privileged that I served in the same cabinet with the governor under Asiwaju Bola Tinubu when he was the Lagos governor
“I have always followed his political progress and I am extremely proud of him for his achievements.”
In his remarks, Aregbesola said he had known Lai Mohammed for over 30 years when their path crossed in 1988 during the era of Social Democratic Party and National Republican Convention.
He said: “We were in the same party, but we did not support the same candidates.
“In 1998, we worked very closely. While I was the Director of Campaign for Tunubu’s governorship aspiration, Lai Mohammed was then the official Chief of Staff to the aspirant.
“We got along very well and we have remained much closed till today.”
Aregbesola commended the minister for being “diligent, effective, reliable, efficient and responsible in any assignment given to him.
“You are like the wine that gets better with age”, he said and thanked the minister for the visit.