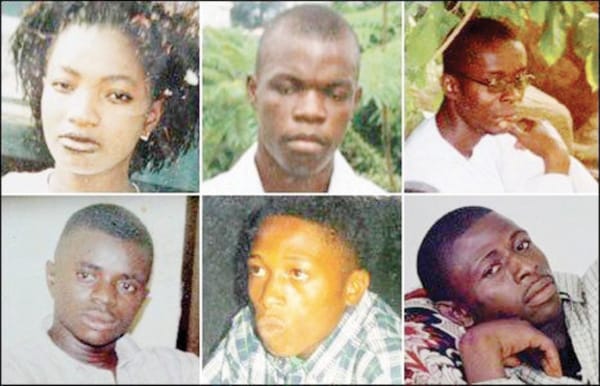 The Igbo Youth Associations, Apo in the FCT on Friday staged a peaceful protest to the FCT High Court and Ministry of Justice, decrying Thursday’s judgment on the Apo six case.
The Chief Judge of the FCT, Justice Ishaq Bello, had in his judgment condemned to death Emmanuel Baba and Ezekiel Acheneje, and discharged Danjuma Ibrahim, Nicholas Zakariah and Sadiq Salami.
They were charged with culpable homicide for the killing of: Ifeanyi Ozor, Chinedu Meniru, Isaac Ekene, Paulinus Ogbonna, Anthony Nwodike and Augustina Arebun.
The five were among six arraigned over the killing of the traders on June 7, 2005 on suspicion that they were armed robbers.
Othman Abdulsalam, the Divisional Police Officer in Apo and the sixth defendant on the charge sheet, is currently on the run.
The protesters through their spokesman, Chief Chemezie Ifeh and Chief Motimor Ihejirka, said they were not happy with the judgment, which condemned only two and the main person was set free.
Ihejirika said: “Danjuma Ibrahim, the DCP, killed Ifeanyi Ozor and now he is free and he was the one who gave the order to the two junior officers to kill the remaining five.
“We demand that if Danjuma would be free, let the two condemned officers be set free because they acted under the instruction of their superior.
“We demand that this case should not be left to go away like this, extra-judicial killing must stop.
“We are submitting our letters to you and hope that you will act on it.”
At the Ministry of Justice, Hamza Tahir of the Legal Drafting Department commended them for their peaceful protest and promised to take their message to the Minister, Abubakar Malami, who was not on seat.
Tahir said: “The judgment has just been passed and if your letters are submitted, we will look at it as well as the proceedings and the judgment.
“The Minister is committed to justice and will look at the issues you may raise in your letter, it can go to appeal and also get to the Supreme Court if the need be.”
Earlier, Edward Meniru, the senior bother of Chinedu, who was among the killed Apo traders, said: “Our father died because of my brother’s murder and our mother since then was sick.
“We demand justice for this killing.”