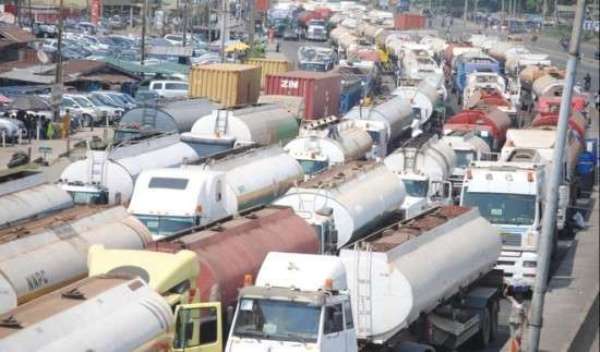 The Lagos State Government on Monday announced the suspension of approval for development of tank farms in Apapa as part of its renewed effort to restore sanity completely as well as fashion out immediate and long term solution along the Oshodi-Apapa corridor and prevent a repeat of the chaos caused by containerized trucks and tankers parked on the road.
Rising from a closed door meeting with stakeholders in the maritime and transport sectors, including Nigeria Ports Authority, Shippers Council, Tank Farm Owners, Department of Petroleum Resources, Security Agencies and Clearing and Forwarding Agents, held at the Lagos House in Alausa, Ikeja and chaired by State Governor, Akinwunmi Ambode, the State Government also resolved to accelerate and complete work on the Bola Ahmed Tinubu Trailer Park in Orile within the next one month.
The State’s Commissioner for Transportation, Ladi Lawanson, who briefed Government House Correspondents on the resolutions reached after the meeting, which lasted for over three hours, said all stakeholders had resolved to work together to bring back sanity on the Apapa axis and would therefore not hesitate to sanction recalcitrant operators who flout the resolutions going forward.
Lawanson, who was joined at the briefing by the Managing Director of NPA, Hadiza Bala-Usman; Secretary to the State Government, Tunji Bello; and other stakeholders, said a Security Task Force has been constituted by the Federal Government and the Lagos State Government and would work continuously for 30 days to bring sanity to the roads, while shipping companies sanctioned for non compliance on utilisation of holding bays in the ports have been extended by five days.
He said to also cushion the effect on the traffic experienced by motorists in the area, the Federal Ministry of Power, Works and Housing would immediately commence palliative measures on bad portions on access roads.
He said: “The Department of Petroleum Resource is to ensure that Tank Farm owners comply with holding bay requirements, while trailers not called upon and found trampling will be impounded and sanctioned in Lagos.
“With immediate effect, Lagos State Government suspends the approval of Tank Farms and the Government is going to accelerate the completion of the Bola Ahmed Tinubu Trailer Park and it should be ready within a month.”
The State Government also directed that all truck and tanker owners must be duly registered and well regulated by their unions, adding that the unions would be held accountable for their adherence to extant rules and regulations.
Lawanson said: “The Nigeria Ports Authority in collaboration with the Lagos State Government will going forward license trailer parks whereby only trucks housed in those designated parks will be granted access. Furthermore, tank farms without adequate loading bays within the next 30 days will be sanctioned.
“These resolutions were arrived at and agreed by all parties and all parties have resolved to jointly implement these resolutions and the effects will be seen by Nigerians very shortly.”
Prior to the meeting, it would be recalled that  the State Government had last week set up a Joint Task Force involving security agencies and stakeholders in the maritime sector to remove all containerized trucks and tankers parked along the Apapa axis.
Tagged: “Operation Restore Sanity On Lagos Roads,” the Task Force, involving 2,271 personnel drawn from the Police, Lagos State Traffic Management Authority, Lagos State Emergency Management Agency, Nigerian Security and Civil Defence Corps, Federal Road Safety Corps and Nigerian Military, including Army, Air Force and the Navy, moved into the area on Friday in an operation that lasted for over 72 hours to open up the service lane in the axis to ease traffic.