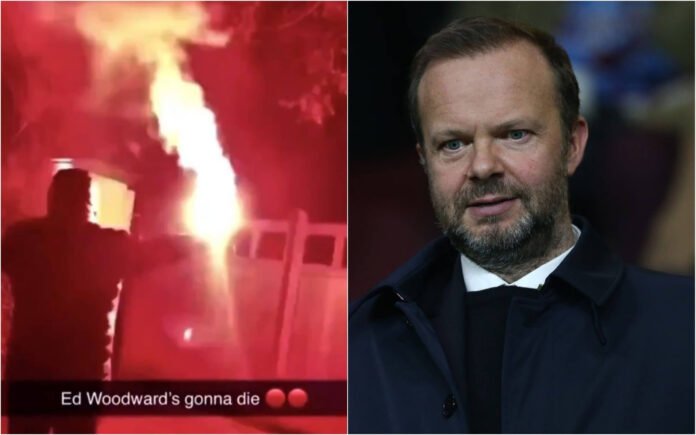 A mob of furious Manchester United fans attacked the home of Ed Woodward on Tuesday night, as anger towards the club’s executive vice-chairman took a sinister turn.
In appalling scenes that drew condemnation from United, shocking footage emerged of a gang of around 20 hooded supporters throwing flares and a smoke bomb at Woodward’s £2 million Cheshire mansion.
Some of the group are believed to be members of United’s notorious “Men In Black”.
The incident is believed to have happened around 8pm on Tuesday night.
Woodward and his wife, Isabelle, and their young twins were not at home at the time.
Greater Manchester Police are investigating.
United issued a strongly worded statement in which they condemned the behaviour and said they would work in conjunction with the police to identify the culprits.
As well as potential prosecution, anyone found responsible would be banned for life by the club.
“Manchester United Football Club have tonight been made aware of the incident outside the home of one of our employees,” the club statement read.
“We know that the football world will unite behind us as we work with Greater Manchester Police to identify the perpetrators of this unwarranted attack. Anybody found guilty of a criminal offence, or found to be trespassing on this property, will be banned for life by the club and may face prosecution.
“Fans expressing opinion is one thing, criminal damage and intent to endanger life is another. There is simply no excuse for this.”
Woodward and the Glazer family, United’s maligned owners, have been the target of sustained abuse from supporters at games in recent weeks over their running of the club.
But that verbal abuse – which has included a series of foul mouthed chants and threats to kill Woodward and the Glazers – took a more violent, threatening turn.
The gang congregated outside Woodward’s house in a quiet village near Knutsford and rang an intercom on the large gates at the entrance of the property.
When no one answered, the thugs graffitied the property by spraying red paint before launching smoke bombs into the grounds and throwing a series of flares.
It remains to be seen if United react by beefing up Woodward’s security on match days and in general but his wife is known to have been left upset and shaken by some of the abuse her husband has been receiving.
Woodward is understood to have received death threats in the past.
Gary Lineker, the former England striker and a friend of Woodward, responded to the sickening footage on social media by condemning the disgraceful scenes.
The attack came shortly after United finally achieved a breakthrough in their protracted negotiations with Sporting Lisbon for Portugal midfielder Bruno Fernandes and 24 hours before Ole Gunnar Solskjaer’s side are due to face Manchester City in the second leg of their Carabao Cup semi-final.
Woodward had been coming under growing pressure from fans to make a signing given United’s injury problems and the lack of quality cover in midfield and attack.
But despite widespread unhappiness at Woodward’s handling of the club, many fans joined in the chorus of condemnation for the attack.
It was not the first time angry United fans have targeted homes, though.
In October 2010, a mob of 30 fans turned up at Wayne Rooney’s former mansion in Prestbury, Cheshire after then England striker had spoken of his desire to quit Old Trafford.
Rooney was warned not to sign for rivals Manchester City and soon after he signed an improved contract to stay with United.
Woodward – who is the highest paid director in the Premier League with an annual salary of £3.16 million – was targeted before United’s game at home to Liverpool in October when fans chartered a plane over Old Trafford trailing a banner which read: “Ed still failing – Woodward out!”