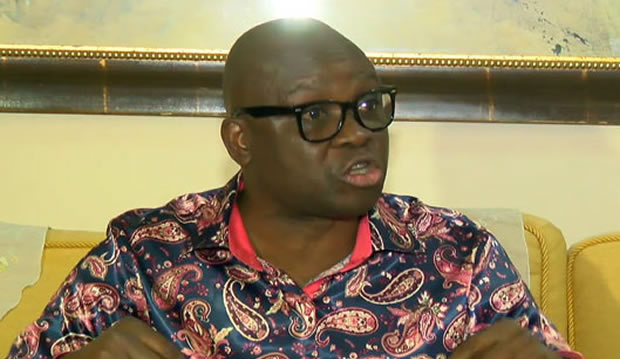 Share
Facebook Twitter LinkedIn Pinterest Email
The Ekiti State Governor, Ayodele Fayose, has described the judgment of the Federal High Court, Ado-Ekiti declaring as illegal the freezing of his bank accounts by the Economic and Financial Crimes Commission as a welcome development.
The Governor stated this in Ado Ekiti on Wednesday through his Chief Press Secretary, Idowu Adelusi.
Fayose said that the judgement was a defeat of fascism republic gradually being nurtured by the All Progressives Congress-led Federal Government.
Fayose said: “The trial judge ordered the EFCC to immediately defreeze the said accounts. This, again, is a welcome development.
“In his ruling, Justice Taiwo Taiwo said the EFCC viciously violated the laws of the land by deliberately neglecting to follow due process and laid down regulations in freezing my bank accounts.
“The judge also found that the EFCC and its lawyers deliberately misled the court in securing its purported interim order to freeze my accounts by not declaring the identity of the owner of the account.
“Justice Taiwo stated that as a sitting governor who enjoys ‘total constitutional immunity’ under Section 308 of the Constitution of the Federal Republic of Nigeria, no legal proceedings could be instituted against me.
“To circumvent this, thereby perverting the course and cause of justice, the EFCC deliberately refused to declare my identity while moving against my accounts.
“The trial judge also found that I was deliberately kept in the dark about the EFCC’s sinister motives and devious plots in that I was not made a party to the case; yet, my accounts were the target of the EFCC’s actions.
“Justice Taiwo thus described this as a breach of my fundamental rights to fair hearing, adding: ‘The plaintiff is entitled to be heard before his property or money can be seized; doing otherwise will amount to denying him fair hearing and constitutional rights.’
“This judgment is, in its totality, a welcome development. It is not victory to me alone but also to all other Nigerians whose rights to hold property; to fair hearing, liberty and the pursuit of legitimate goals have been viciously assaulted by the Muhammadu Buhari administration.
“What the EFCC engaged in is, at best, called ‘Oluwole’ and the illegal interim order it said it procured to freeze my accounts is ‘Jankara’; these are well-known euphemisms for fake and ‘arrange’ miscarriage of justice by touts and area boys.
‘While I salute the courage of Justice Taiwo and encourage all other Nigerian judges to stand firm as defenders of the rights of the citizens against creeping fascism; permit me to point out the dangerous and damaging consequences of the deliberate and ceaseless attacks on me by the Buhari administration.
“One: It is a scantily-concealed attempt to muzzle the opposition and turn Nigeria into a one-party state. The sustained attack on me, who is seen as the face and voice of the opposition in the country today, is a grand design to silence me and kill opposition politics in Nigeria.
“Two: The Buhari administration is destroying institutions without which there can be no strong and virile democracy. The EFCC, ICPC, DSS, Police, the Armed Forces, INEC etc, have all been conscripted into an arm of the ruling party. They no longer serve the overall interests of Nigerians but the partisan interests of the APC and the fascist agenda of President Muhammadu Buhari.
“Three: And this should be of grave concern to Nigerians, is that the banking industry is being systemically destroyed by the strong-arm tactics of the EFCC, whereby the banks are now bamboozled and coerced into taking illegal actions against bank customers. Soon, Nigerians will begin to avoid the banks to prevent their hard-earned money being seized at will by the EFCC acting the scripts of a dictatorial President.
“The economy, which was buoyant and boisterous under ex-President Goodluck Jonathan 18 months ago, is now in recession. The prognosis for 2017 under this clueless and ineffectual government is dire still. The assault on the banks by the EFCC will make the situation to get even worse.
“This administration and the EFCC are better advised to respect Justice Taiwo’s judgment ordering the immediate and unconditional de-freezing of my accounts. They should also return from the path of illegality and self-destruction by immediately obeying all court orders they have so far spurned; especially as it concerns those they have clamped in illegal detention all over the country.
“But should they insist on continuing on their perilous path, I promise that we shall give them no quarter. To take Nigeria back and make it great again is a task that must be done.”