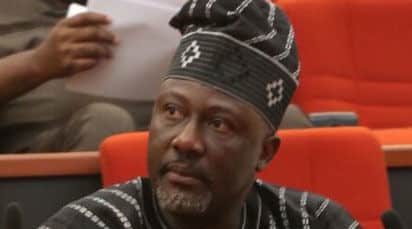 Embattled Senator Dino Melaye on Thursday instituted a N5 billion libel suit against the Saharareporters Media organization and their sponsors for reporting on its media platform that he his not a graduate of Ahmadu Bello University, Zaria.
‎Melaye stormed the court on Thursday morning to file the court action at the Federal Capital Territory High Court, against the Publisher of the online platform, Omoyele Sowore.
Melaye is the suit demanded for N5 billion as compensation for damages done to his reputation in the alleged libelous publication of the Sahara Reporters.
In the suit filed by his lawyer, Marx Ikongbeh, Melaye requested for another sum of N10 million as cost for the court action.
Defendants in the suit are: The Incorporated Trustees of Sahara Reporters Media Foundation, Omoyele Sowore, Temitope Olumuyide and Sahara Reporters Media Group Incorporation as first, second, third and fourth defendants respectively.
In the statement of claim, the plaintiff claimed that he is a highly visible politician known in Nigeria and globally and he ranks high among well-known public office holders currently in Nigeria having served in several capacities, especially as a member of the lower and Upper Chambers of the National Assembly.
He claimed to have become a beacon and model to youths of the world due to the root of his political life, which he began in Students’ Union affairs at the Ahmadu Bello University and that his leadership qualities have made him a role model and successfully transformed him from a youth leader into a national leader reputed for frankness, forthrightness and principled leadership.
Court is yet to fix a date when the matter will be heard.