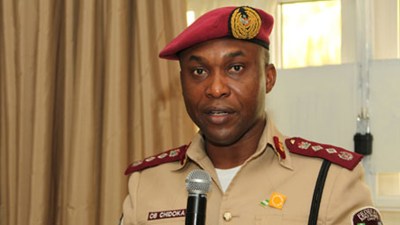 No fewer than 280 persons have been confirmed dead in 480 crashes in 16 days.
The 16 days covered December 19, 2012 to January 3, 2013.
The Corps Marshal of the Federal Road Safety Corps, Osita Chidoka, gave the statistics in Abuja on Friday when he spoke with newsmen at the Nnamdi Azikiwe International Airport, Abuja, after an aerial patrol of road traffic.
Chidoka further revealed that 1,600 people sustained injuries from the accidents.
He said: “Compared to last year, there is slight improvement and we hope this improving trend will continue because in the past 10 years, FRSC has successfully brought down crashes within December period year on year.
“Traffic is moving clearly and our efforts in managing the traffic has been very successful in this year ‘Operation Zero’, coupled with the fact that the roads have vastly improved.”
During the period under review, Chidoka said 13,000 vehicles were booked for various traffic offences out of 36,000 stopped by operatives of the FRSC, while the rest were cautioned and discharged.
He said out of the 399 traffic offenders charged to mobile courts, one was sentenced to jail, 370 fined and the rest discharged and acquitted.
He added on why the success rate has been higher: “We have been learning from our experiences and also we have improved data collection and analysis.
“Second was the increase in our staff strength which happened in the last one year and a half.
“We have more people to deploy on the roads and thirdly is our improved monitoring mechanism.
“This is our effort to improve oversight of people who were given work and making sure that it is done.”