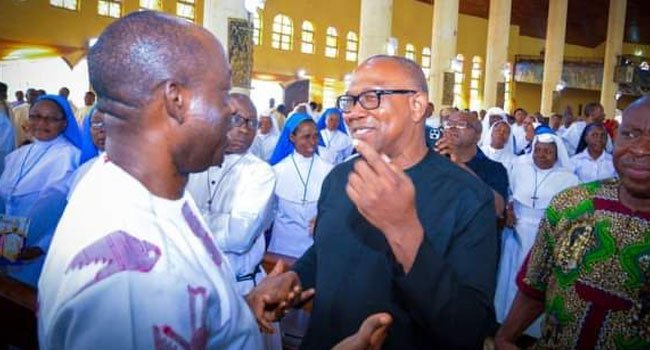 After a war of words, the presidential candidate of the Labour Party for the 2023 elections, Peter Obi, and his state Governor, who was elected on the platform of the All Progressives Grand Alliance, Prof. Charles Soludo, on Thursday met and embraced.

They met in Awka on Thursday at St. Patrick’s Cathedral during the Thanksgiving Mass for Most Rev. Paulinus Ezeokafor.

The Catholic bishop of Awka Diocese was celebrating his 70th birthday.

Soludo had in a lengthy piece castigated Obi over some of his actions as governor of Anambra State, while the presidential candidate of the Labour Party told the former Governor of the Central Bank of Nigeria to use his economic wisdom to govern the state and make it better.

Speaking after the service, Soludo told newsmen that his face-off with Obi was purely political, adding that they have agreed to meet in a few days to iron out their differences.

He said: “Today is also very special because it is the bishop’s 70th birthday anniversary.

“It is also the first time my brother, Peter Obi, and I are meeting in a public event.

“Eventually, it is holding in a Catholic Church, which the two of us belong to.

“Fortunately, he told me that he would attend the service.

“When I came in, I went to meet him where he sat down and we hugged.

“Some of the people watching us were surprised.

“Perhaps, wondering if it were not the same people who were quarrelling.

“Let me even tell you: We spoke two times last night.

“And today we met again.

“Some might have thought that it was a drama.

“You know I’m not one of those politicians that speak from two sides of the mouth.

“I say I’m a politician, but I also want to make heaven.

“I am not a politician that doesn’t tell the truth.

“Say the truth and it shall set you free.

“So, there is no rift between Obi and I at a personal level.

“Nobody snatched each other’s wife.

“What appears to be the rift between us is fundamental political differences; nothing else.

“So, for those forging things to blackmail me and all that.

“There was one I saw recently.

“They said I collected bribes to say what I said.

“I asked them to bring it so I’ll use it to construct roads.

“If Soludo takes bribes, he should have been a multi trillionaire.

“We must get things done.

“The fundamental differences we have, we are going to meet in the next few days, maybe weeks.

“We’ve agreed to meet and discuss.

“Unfortunately, he’s left, but once we meet, we’ll discuss it.”