2019: Kalu’s poster for president on APC platform surfaces in Abuja

Posters alleging that a former Governor of Abia State, Dr. Orji Uzor Kalu, is set for the 2019 presidential election on the platform of the All Progressives Congress have surfaced in Abuja.
The posters were largely seen along the ever busy Airport Road.
They bore the inscription: “Vote Orji Kalu for President on the platform of the APC.”
However, Kalu has distanced himself from the posters.
He described them as fake campaign posters.
According to Kalu, who is also a staunch supporter of President Muhammadu Buhari, the posters are the handiwork of political jobbers and speculators, who are afraid of his unstoppable political feat.‎
In a statement issued in Abuja on Thursday by his Special Adviser, Kunle Oyewumi, Kalu insists that he is solidly behind the candidature of Buhari if he so desires to run in 2019, adding that the North should be allowed to complete its eight years before the Igbo will have “their rightful turn in 2023”.
Kalu said: “After a two-week business trip to China, to my surprise on my way from Nnamdi Azikwe International airport, Abuja this morning, I sighted the malicious posters in my name with the caption: ‘Kalu for President.’
“It is definitely the handiwork of some politicians who are either afraid of my political capacity or enemies of the present administration as I have continually maintained my support for Mr. President.
“The action of these jobless politicians is a ploy to damage the robust relationship I have with President Buhari and the top hierarchy of the APC.‎
“Such political blackmail is not only disheartening but unhealthy for Nigeria’s growing democracy.
“While I call on the unsuspecting public, especially members of the APC, to disregard the vicious posters, I am also reaffirming my unflinching and unaltered support for Mr. President.
“I will contest in 2019 by the grace of God but definitely not for President.”
The APC chieftain while appealing to the political class to play the game by the rules, called on the electorate to be wary of desperate politicians, adding that the collective interest of Nigerians is paramount and should be placed above selfish ambitions. 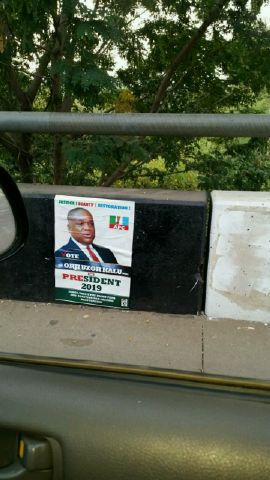