2019: APC has fulfilled some of its promises, deserves another term – Aisha Buhari 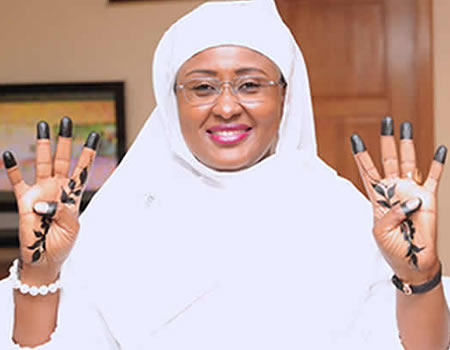 The Wife of the President, Hajia Aisha Buhari, has tasked women and youths of the All Progressive Congress to ensure victory for the party in the forthcoming presidential election.
Buhari made the call on Saturday during the launch of the APC Zonal Campaign Rally for the North West held at the Sani Abacha Stadium, Kofar Mata, Kano.
The wife of the President explained that she was encouraged to drum support for the APC because of the various social intervention programmes initiated by the Buhari-led administration.
Buhari, who spoke in Hausa, said: “In 2015, the APC made some promises and I have come out to campaign for its victory in the 2019 polls because the party has fulfilled some of the promises it made to Nigerians.
“Those promises include the school feeding programme for primary school pupils; the N-Power programme, under which some unemployed graduates are being gainfully engaged and are earning N30,000 monthly; the conditional cash transfer scheme, which is being executed through the office of Vice President Yemi Osinbajo.”
Buhari expressed her commitment to ensuring greater participation of women and youths in the APC administration.
On his part, the former Governor of Akwa Ibom State, Senator Godswill Akpabio, assured the APC of his determination to deliver his state to the party in the forthcoming presidential election.
Akpabio said the social intervention programmes of the APC administration had gone a long way in empowering unemployed youths, especially the N-power programme.
He also assured the wife of the President of Akwa Ibom State APC’s commitment to mobilise women from the South South to ensure victory for President Buhari in the 2019 election.
On his part, Hon. Abdulmumini Jubril, member representing Kiru/Bebeji Federal Constituency of Kano State, called on Nigerian youths to support the re-election bid of President Buhari.
Jibril said: “This election is about the future of Nigerian youths, so we are calling on Nigerian youths to compare what we have in the past and what is obtainable now, especially the repairs that the President is carrying out on our damaged infrastructure and our battered economy.”
Also speaking, a former Inspector General of Police, Suleiman Abba, said the APC government had done a lot to improve the economic situation of Nigeria.
Abba said the success recorded in the agricultural sector was made possible due to the focus and determination of President Muhammadu Buhari.
He urged Nigerian women to support the re-election of Buhari to enable him consolidate on the achievements so far recorded in road construction and railway projects.
The event was attended by Governor Umar Ganduje of Kano State; Minister of Interior, Abdulrahman Dambazau; Senior Special Assistant to the President on Administration, Dr. Hajo Sani; retired General Buba Marwa; and some APC senators among others.