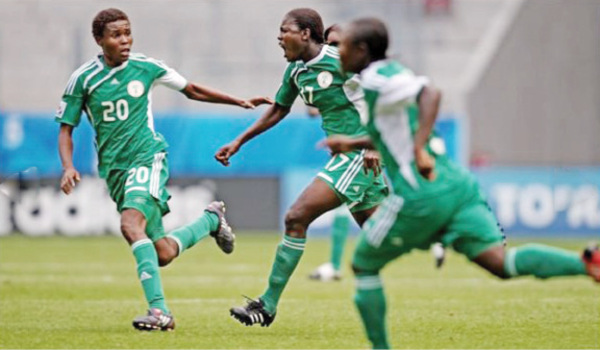 Nigeria’s Consul General in South Africa, Godwin Adama, on Saturday commended the National U-20 female national team, Falconets for beating their South Africa counterparts.
Nigeria beat South Africa, 2-0, in the final round, first leg of the U-20 Women`s World Cup qualifier in Polokwane, Limpopo Province.
Rasheedat Ajibade, the Falconets top scorer in the qualifying series, scored the first goal on the half-hour mark while Anam Imo made it two for Nigeria six minutes later.
Adama who watched the match told the News Agency of Nigeria on the telephone from Polokwane that the Falconets played well and deserved the victory.
He said: “The Falconets showed character and zeal to carry the day. They played well and deserved the victory. They have made us proud and we are grateful.
“I am impressed with the turn-out of Nigerians to the stadium. Their presence also made the difference and motivated the team.”
Adama said that the Nigerian High Commissioner to South Africa, Ambassador Musa Ahmed Ibeto would host the team in Pretoria before they leave for home.
He said: “The victory has also helped to improve our rating here that we can do well in sports.”
Collins Mgbo, Secretary, Nigerian Union, Limpopo Province chapter, said that the Nigerian Community in the area was fully mobilized for the match.
Mgbo said: “Nigerians resident in various cities in the province came out to support our girls. Even South Africans married to Nigerians wore the green-white-green to cheer the falconets.
“We will celebrate this victory because it means a lot for us.”
Mgbo urged the team to finish the job in Nigeria and book the World Cup ticket.
The winner over two legs will represent Africa at the FIFA U-20 Women’s World Cup in France slated from August 7th to August 26th, 2018.