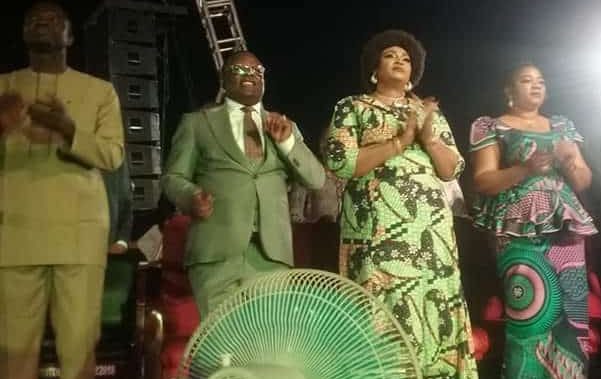 The announcement of the incumbent, Governor David Umahi, as the winner of the governorship election in Ebonyi State has triggered off mass jubilation across the nooks and crannies of the State.
Travelling round Abakaliki, the capital city, revealed large clusters of youths in recreation centres and other of such public places, drinking and making merry over what they described as “fulfillment of our expectations”.
The Christ Embassy Church, Abakaliki, where the Governor is an ordained Deacon, was not left out in the celebration as they organised an open evening service of thanksgiving in which Umahi was present to appreciate God for granting him victory at the polls.
Umahi, who led the crowd in extensive praise and worship sessions, declared that the night was not that of speech making.
He recalled that Thursday before the elections, Ebonyians trooped out enmasse to join him in praising God at the Pa Ngele Oruta Township Stadium, Abakaliki in anticipation of victory, adding that God has confirmed his earlier promise to grant the Divine Mandate another victory.
The INEC returning Officer for the Governorship Election in the State, Prof. Frank Chukwuemeka Eze, had earlier declared Umahi, the Peoples Democratic Party candidate, winner of the elections.
Announcing the final results at about 8pm at the INEC headquarters, Abakaliki, the returning officer, who is also the vice Chancellor, Federal University of Technology, Owerri, disclosed that the PDP scored a total of 393,043 votes to beat its main rival, the All Progressives Congress, with Sonni Ogbuorji as candidate, who scored 81,703 votes.
EZe commended Ebonyians for their peaceful conduct at the polls and certified the election as free, fair and credible.
The returning officer said the results collated from the 13 local government areas of the state showed that the PDP candidate won in all the 171 registration areas and the 13 local government areas.
According to him, total valid votes cast in the election was 482,018, while the total rejected votes was 4,984.
He put the total votes cast at 493,002.
He announced: “I, Professor Chukwuemeka Eze, State Returning officer for the Ebonyi governorship election held on Saturday, March 9 hereby declare the candidate of the PDP, Chief Dave Umahi, winner of the governorship election.
“Having won the highest number of votes cast in the election, he has fulfilled the requirements of the law and is hereby declared the winner and returned elected.”
The INEC Resident Electoral Commissioner in Ebonyi State, Prof. Godswill Obioma, commended all the parties for their endurance and attitude in maintaining peace from the beginning till the end of the exercise, adding that the outcome should be taken by all in the spirit of sportsmanship.
The PDP also won all the Assembly seats in the State Legislature.
Meanwhile, Umahi has expressed his gratitude to the citizens of Ebonyi State for re-electing him for a second term, promising to consolidate on his aggressive infrastructural, human capital development and aggressive industrialization of the state in line with his divine vision and mission for the State.
Umahi, who reiterated his earlier vow to hand over power to Abakaliki bloc in 2023 after completing his second term, said he would totally respect the equity tripod upon which the political foundation of the State was built by supporting the continued rotation of power round the three senatorial zones of the state in the spirit of equity and justice.
In a statement signed by his Chief Press Secretary, Emmanuel Uzor, Umahi described the election as the reflection of the wishes of Ebonyi people who have been resolute and desirous of consolidating on the already achieved development in the state.
The statement also quoted Umahi as saying the election was the best in terms of credibility and professionalism on the part of INEC and all security agencies.
He called on those who contested with him to accept their defeat as the will of the people of the state and join hands with him for a more prosperous Ebonyi State.
He promised that his second term projects would include the construction of Ebonyi airport, mega Olympic size stadium, an ultra modern Teaching hospital for the State University as. Well as the completion of the already started 198km Abakaliki ring road and many more.
He expressed pride that within the first four years of his administration, over 534km of roads have been constructed on rigid pavement with over 100 yeas life span; Mega Shopping Mall, International market, Ecumenical Centre as well as new government House have made Ebonyi a development model.
He said Ogbuoji was never a match for him, noting that the verdict of the entire people of the state as reflected in their ballots across the 13 Local Government areas of the state confirmed that his opponent was never and will never be a match for his political sagacity.
Umahi commended the INEC for their professionalism and expressed readiness of his administration to seek justice for those whose lives were cut short in the course of the election with the aim of bringing the perpetrators to book irrespective of party affiliations.
He thanked the Christian and Muslim communities, civil and public servants,Market women, widows and indeed the entire people of the state for recognizing his modest efforts in his first term by entrusting their mandate on him again for another four years and pledged never to disappoint them.