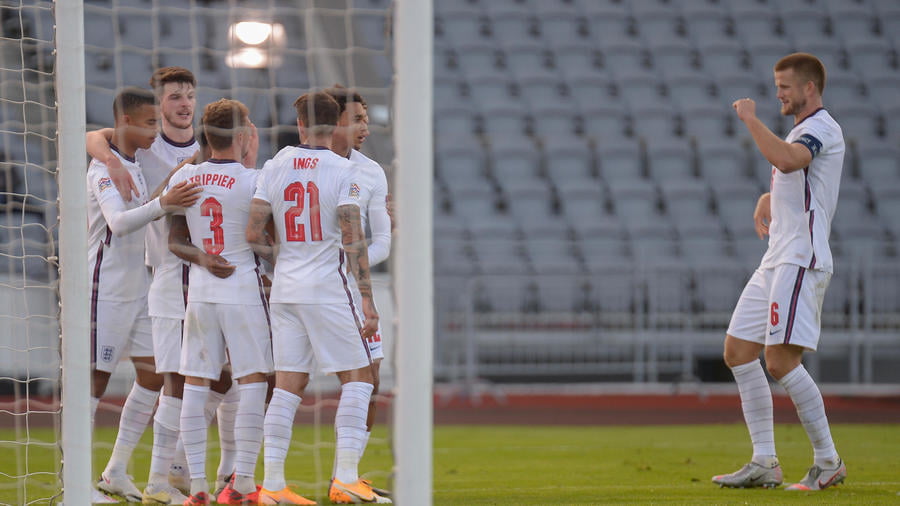 Raheem Sterling’s last minute penalty salvaged England from another embarrassing result against Iceland as Gareth Southgate’s men survived going down to 10 men and Birkir Bjarnason also missing a late spot-kick to start their Nations League campaign with a 1-0 win in Reykjavik on Saturday.

Four years on from one of English football’s most embarrassing nights in losing 2-1 to Iceland at Euro 2016, the Three Lions were far from the free-scoring force that romped through Euro 2020 qualifying in their first match for 10 months.

Harry Kane had an early goal wrongly ruled out for offside before Kyle Walker was sent-off for two bookable offences 20 minutes from time.

All of Iceland’s good defensive work was undone in the 89th minute when Sverrir Ingason was also harshly dismissed for a second booking when he blocked Sterling’s shot with his arm.

With Kane having been replaced by Mason Greenwood, Sterling took responsibility from spot, but the drama did not end there.

Straight from kick-off, Joe Gomez was adjudged to have bundled over Holmbert Fridjonsson inside the area, but Bjamason blazed the resulting penalty over.

Southgate’s men continued to enjoy the vast majority of possession in the second period, but the closest they came to breaking the deadlock before the dramatic finale was when Iceland’s Kari Arnason flicked Kieran Trippier’s free-kick onto his own post.

Moments later Walker’s ill-judged lunge to break up an Icelandic counter-attack left his side a man down.

A breakthrough did not look like coming until Sterling collected an overhit corner and the ball struck Ingason’s arm in his attempt to block the shot.

Sterling coolly rolled his penalty straight down the middle and how Bjarnason wish he had showed the same composure as his wild finish let England off the hook.