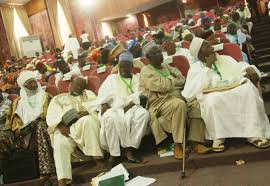 The National Chairman of the Movement for the Creation of Lowland State out of the present Plateau and Bauchi States, Ambassador Nanyah Andrew Daman, has condemned the non inclusion of Lowland State in the list of the 19 tates recommended by the National Conference recently.
Daman, in a statement on Monday in Jos, berated the delegates from Plateau State for not doing much to protect the interest of the state while others were lobbying for the creation of new states from their home states and zones.
He said: “It is quite disappointing that Plateau State with about 10 representatives, from Retired Army Officers, the Traditional Institution, Federal and State Government quota, yet they remained aloof when serious issues were being discussed.
“History will never forgive those who turn the other way and remain indifferent when serious issues that will salvage their people from socio-economic slavery of the core north were discussed.”
The chairman of the group wondered what the delegates from Plateau State will tell their grand children yet unborn when asked why they were unconcerned when new states were being created.
Daman called on all Plateau State people who are interested in the rapid socio-economic development of the state to put pressure on all delegates from the state to push for issues that will be more beneficial to the masses and not the elites.
The Movement also condemned the killings of farmers by Fulani herdsmen in Zama Dede village of Langtang North LGA, where seven people lost their lives and properties worth millions of naira destroyed.
Damian urged the Federal Government to build ranches for herdsmen all over the country to avoid constant clashes with farmers across the nation.
On the Chairman of Langtang North LGC, Hon. Godwin Nanmwa Kumzhi, who was sworn in recently, the group urged all in opposition to sheath their swords, embrace peace and support him for quick infrastructural development of the area.