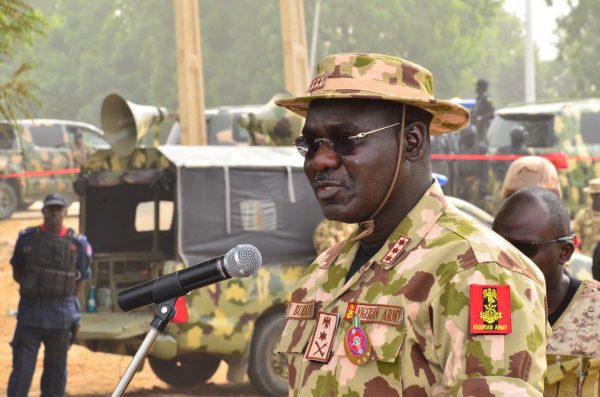 The Nigerian Army says it has empowered a soldier’s wife in Yola, Adamawa State with a contract to produce 1,000 sweaters (pull over) for its troops.
Brigadier General Sani Muhammed, the Commander of 23 Armoured Brigade, Yola, disclosed this at the opening of the Nigerian Army Entrepreneurship and Skills Acquisition training in Yola on Monday.
Muhammed said the contract was awarded to the woman, Helen Aci, following directive by the Chief of Army Staff, Lieutenant General Tukur Buratai, during his visit to the Brigade.
Aci is a wife of a serving soldier who specialises in knitting.
Muhammed said: “You will recall that during the inspection visit by Chief of Army Staff, Lieutenant General Tukur Buratai, he saw some sweaters knitted by the woman in the barrack.
“Buratai was impressed by the brilliant work of the woman and directed that she be given contract to produce 1,000 sweaters, popularly known as pull over, for troops.
“As I speak to you, the woman has commenced production of three different types of sweaters, which we are going to forward to Army Headquarters for assessment.”
Muhammed disclosed that the Nigerian Army was ready to give more orders to the woman if she was able to produce qualitative and standard materials.
On the Entrepreneurship and Skills Acquisition training, Muhammed said the centre has enrolled about 77 trainees for the programme.
He said 53 of the trainees were given starter packs to start their own businesses at the end of the programme.
“The beneficiaries include children and spouses of soldiers as well as those from neighbouring communities,” he said.
According to him, the objective of the training was to empower and improve the living condition of families of soldiers as well as maintain cordial relationship within the barrack community.
Speaking on behalf of the beneficiaries, Oluwale Ola, thanked the Nigerian Army for the training.
Ola assured that the beneficiaries would take advantage of the training to acquire business skills to help their families.