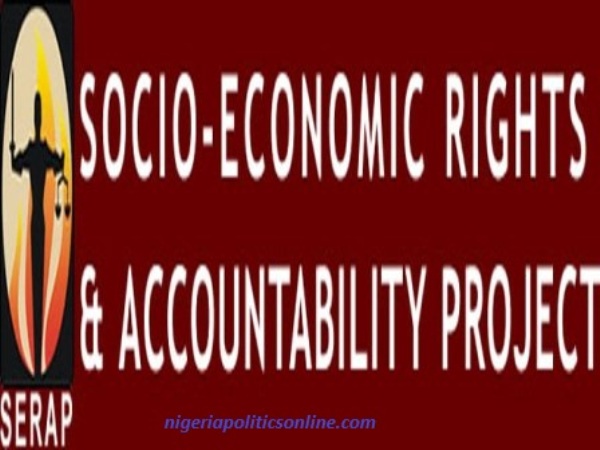 Share
Facebook Twitter LinkedIn Pinterest Email
The Socio-Economic Rights and Accountability Project has sent an open letter to President Muhammadu Buhari urging him to use his leadership position to “direct the Attorney General of the Federation and Minister of Justice Abubakar Malami, SAN, and/or appropriate anti-corruption agencies to without delay investigate the alleged payment of N17 billion to the National Assembly as ‘election expenses’ of its members to pass the 2015 budget, and if there is relevant and sufficient admissible evidence, prosecute anyone suspected to be involved.”
The organization also urged the president to “instruct the Attorney General and/or appropriate anti-corruption agencies to publish the report of any such investigation including the names of anyone that may have benefited from the public funds, and to ensure the recovery of proceeds of corruption.”
The organization said it would “institute legal proceedings to compel your government to act in the public interest if these steps are not taken within 14 days of the receipt and/or publication of this letter.”
Former Minister of Finance under President Goodluck Jonathan’s Administration, Dr. Ngozi Okonjo-Iweala, had alleged on page 80 of her book, titled: “Fighting corruption is dangerous,” that “N17 billion was forced into the budget for election expenses of members of the National Assembly with the agreement of its leadership. The funds became the price to pay to have the 2015 budget passed.”
But in the letter dated June 1, 2018 and signed by SERAP’s Deputy Director, Timothy Adewale, the organization said: “The allegation of budgeting N17 billion as election expenses of lawmakers suggests a fundamental breach of article 15 of the UN Convention against Corruption, which Nigeria has ratified. Using public funds as election expenses of lawmakers is contrary to the convention, which prohibits bribery and requires the authorities to ensure proper management of public affairs and public funds.”
According to the organization: “The illicit or improper nature of the election expenses is buttressed by the fact that the election of any lawmaker is a ‘benefit’ to him/her and not a matter of public interest or legitimate public spending, and implicitly amount to an abuse of legislative powers for private gain.”
The organisation said: “Allowing lawmakers to enjoy illicit benefits is an arbitrary or unjust exercise of executive functions. Facilitating N17 billion as election expenses has undercut access of millions of Nigerians to public services, as the funds could have been legitimately spent on services such as health, education, electricity supply or public transportation that those with few resources are dependent upon.”
The statement read in part: “The required elements of the offence of bribery are those of promising, offering or giving something to a public official, such as the alleged N17 billion for election expenses of lawmakers. The allegation that the members of the executive allowed the National Assembly to have their way on the N17 billion also suggests giving the lawmakers an undue advantage to get the 2015 budget passed. The undue advantage or bribe also seemed linked to the official duties of lawmakers to induce the passing of the budget.
“SERAP notes that the alleged N17 billion bribe has increased attention to the growing lack of transparency and accountability of the National Assembly, and the corresponding loss of trust and faith by Nigerians in the budgeting process and disillusionment in their lawmakers.
“Investigating the allegation, identifying those suspected to be involved and ensuring that they are promptly brought to justice as well as ensuring recovery of any proceeds of corruption would help address the crisis of integrity in the National Assembly and contribute to improving public trust as well as promote access of Nigerians to an honest public service.
“The ultimate object of any government is to promote good governance and the greatest happiness of the greatest number. This means stopping arbitrariness in the budgeting process, and in the use of public funds as well as replacing privilege with transparency and accountability that characterize a democratic society.
“SERAP is concerned that the allegation of budgeting N17 billion for election expenses of lawmakers if proven would amount to gross violations of law, abuse of power, and bribery, and indeed, undermining the law-making and budgeting process. We urge your government to use this case as an opportunity to demonstrate its willingness to comprehensively address the endemic flaws and corruption in the budgeting process.
“We note that the Attorney General is a defender of public interest and has the powers under Section 174(1) of the Constitution of Nigeria 1999 (as amended), to institute and undertake criminal proceedings against anyone suspected to be responsible for acts of corruption.”
Abubakar Malami Dr. Ngozi Okonjo-Iweala National Assembly President Goodluck Jonathan President Muhammadu Buhari Socio-Economic Rights and Accountability Project Timothy Adewale
Share. Facebook Twitter Pinterest LinkedIn Tumblr Email