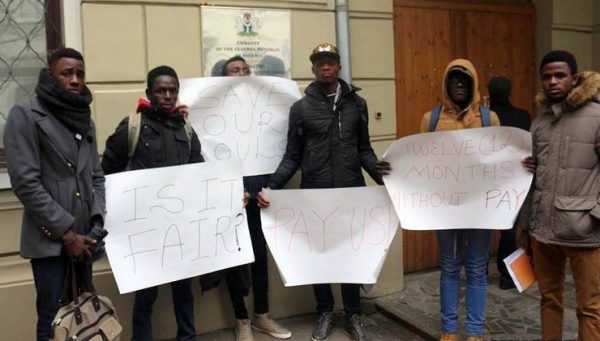 Nigerians studying in Russia under the Bilateral Education Agreement say they are finding it increasingly difficult to continue with their scholarship in that country.
Under the BEA scholarship, the Russian Government takes care of the students’ tuition, while the Nigerian Government pays each of the student $500 monthly for their upkeep.
Lawal Mustapha, President, Association of Nigerian Scholarship Students in Russia, told the News Agency of Nigeria on telephone from Samara, Russia on Thursday that students were owed 20 months arrears.
Mustapha said: “We are appealing to the Nigerian government to pay 20 months stipend arrears owed to us.
“We also plead that they pay us the stipend as at when due.
“The BEA award stipulates that the Nigerian government takes care of our living cost monthly with $500, while the host country pays the students’ tuition,” he said.
He said the Russian government had faithfully held up their end of the agreements by paying BEA scholarship students’ tuition as at when due.
“But unfortunately, the Nigerian government has not faithfully kept their own part of the agreement,” Mustapha said.
He said the students needed the money to pay for their accommodation, Visa renewals, health insurance cover, feeding and other bills.
According to him, the affected students have been living in hardship as many have been threatened with eviction notice from their hostels and deportation.
“We have resorted to looking for other means to fend for ourselves by working illegally for long hours in the cold winter for meagre pay. We are suffering,” he said.
Reacting, Alhaja Asta Ndajiwo, Director, Federal Scholarship Board, said efforts were being made to pay the students their outstanding arrears.
Ndajiwo said the board had forwarded memos to the Central Bank of Nigeria to start payment of both 2017 and 2018 arrears of the stipend.
“The arrears will be paid to the scholars bank accounts,” she promised.
NAN reports that the Minister of Education, Malam Adamu Adamu, during a news conference in Abuja on Thursday also assured the students that their arrears will be paid.
Adamu said the Federal Government was committed to fulfilling its financial obligations to students pursuing undergraduate and postgraduate degrees both at home and abroad.
He said: “On our part, we will do our utmost best to meet our obligations arising from all bilateral agreement as much as circumstances will permit.
“Nigeria under the Federal Government Scholarship, BEA and Commonwealth Scholarship Scheme, has 2,953 students studying abroad.”
Adamu said the balance of the 2018 appropriation had been released with focus to offsetting the arrears owed to students.
He said: “It is important to note that since the inception of the President Muhammadu Buhari administration, the Federal Government has committed about N3 billion under the three schemes.
“As I speak, the balance of the 2018 appropriation has been released and preparation is on to pay the scholars.”
No fewer than 753 Nigerian students under the BEA programme are currently pursuing various undergraduate and postgraduate degrees in Russia, Algeria, China, Hungary, Morocco, Egypt, Cuba, Romania, Turkey, Ukraine, Tunisia and Serbia.
NAN.