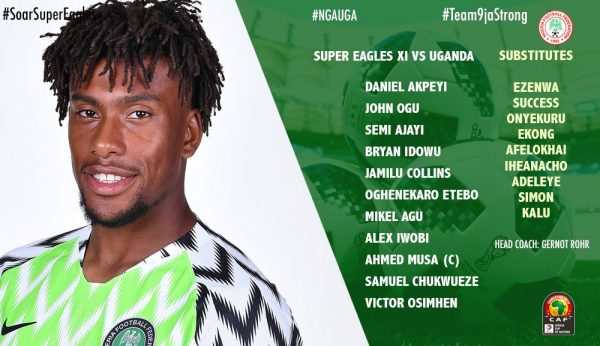 The duo of Victor Osimhen and Samuel Chukwu zee have been handed starting shirts for this afternoon friendly against the Cranes of Uganda at the Stephen Keshi Stadium, Asaba, Delta State.
Both players were star attraction when Nigeria won the FIFA Under 17 World in 2015 in Chile.
While Chukwueze was adjudged the Most Valuable Player, Osimhen won the tournament’s highest goal scorer’s award.
Meanwhile, Chippa United of South Africa’s Daniel Akpeyi is back in goal after sending some months on the sideline. He must convince the technical crew that he is better than Francis Uzoho.
Akpeyi will get cover from John Ogu, Semi Ajayi, Bryan Idowu, and Jamilu Collins, while Oghenekaro Etebo, Mikel Agu and Alex Iwobi have been saddled with the midfield role.
The duo of Samuel Chukwueze, Victor Osimhen will also join Ahmed Musa in hunt for goals.
The listed substitutes are; Ikechukwu Ezenwa, Isaac Success, Henry Onyekuru, William Troost-Ekong, Timothy Afelokhai, Kelechi Iheanacho, Adeleye, Moses Simon and Samuel Kalu.
The tie is slated to kick off at 4:30pm Nigeria time.