A former aide of former Presidents Goodluck Jonathan and Olusegun Obasanjo, Dr. Doyin Okupe, has recanted on his earlier position on the emergence of former Vice President Atiku Abubakar as president next year.
Okupe had on Monday said the emergence of Abubakar as president for just one day will cost Nigeria 10 years to recover.
He said with the President of the Senate, Dr. Abubakar Bukola Saraki, as president, Nigeria will make history.
But on Tuesday, the former spokesman of Chief Obasanjo, recanted, saying Nigeria will make history as a nation if Abubakar emerges as president in 2019.
Abubakar, a presidential aspirant on the platform of the Peoples Democratic Party, had, after consultations, officially declared last month for the 2019 presidential election.
He has also embarked on continued nationwide consultations with PDP stakeholders ahead of the party’s primary.
Okupe in a tweet from his personal Twitter handle: @doyinokupe late on Tuesday evening, retracted an earlier tweet attributed to him that generated backlash among Nigerians.
He said that the post that was attributed to him did not originate from him and apologized to the former Vice President.
He tweeted: “I did not originate d post saying if Atiku ruled, Nig will not recover in 10yrs, but if SP, it’ll bcom history. I changed bcos history to will make History. Can never insult Atiku 4 any reason.” 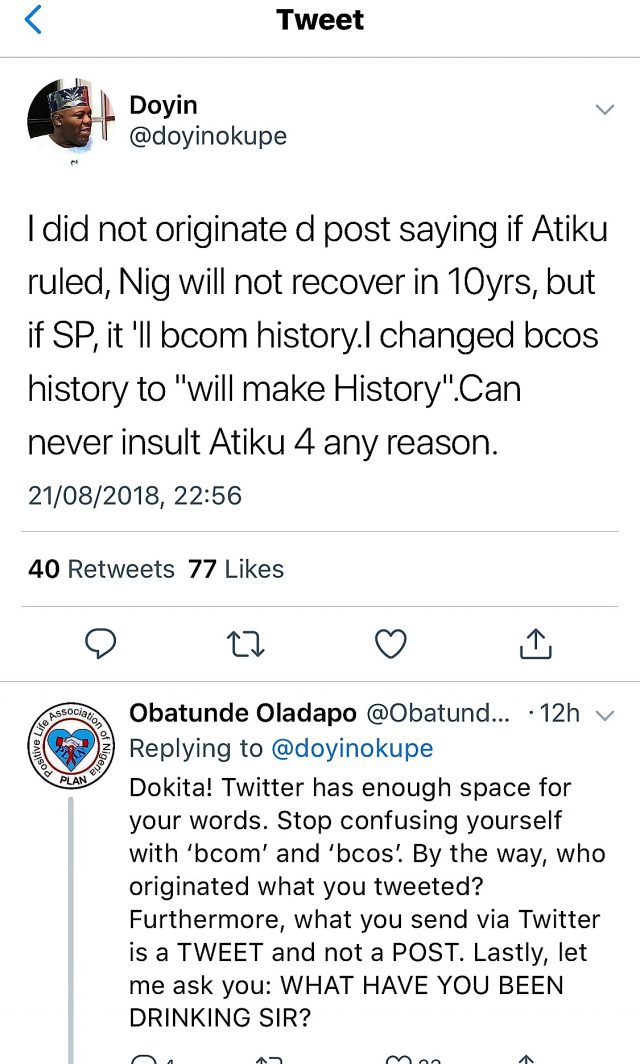 Breaking: Col. Umar to Buhari: Your skewed appointments will ruin you, Nigeria

Liverpool will not ease up after sealing EPL title — Klopp