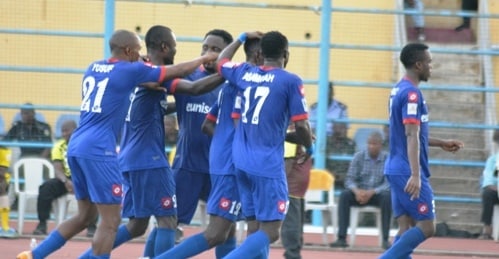 Rivers United will be gunning for a third consecutive home win in the Nigeria Professional Football League this season when they face Enyimba International in Port Harcourt this afternoon.
United has won on each of the last two occasions they have faced Enyimba in the NPFL in Port Harcourt and will be hoping the normal service continues today.
Enyimba however look to be on a renaissance this term and won 1-0 against Nasarawa United in their last NPFL game on Thursday at the UJ Esuene Stadium, Calabar.
Stanley Dimgba scored the winner against the Solid Miners and he is likely to start against the ‘Pride of Rivers’ on Sunday, supported by a stellar cast that includes Stephen Chukwude, Chinedu Udeagha and fearsome attacker, Chinonso Okonkwo, who makes a return to his old stomping ground.
Okonkwo is a darling in Port Harcourt having played his part as United punched above their weight to finish as runners up behind Enugu Rangers in the NPFL two seasons ago.
Enyimba head coach, Paul Aigbogun, is likely to favour Ghanaian goalkeeper, Fatau Dauda, to start between the sticks, while Olayinka Onaolapo and Benjamin Francis represent a strong spine in the back four.
Ugochukwu Leonard, Ernest Governor, Dare Ojo and Ifeanyi Anaemena are other individuals that Aigbogun would be looking to bank on for a positive result in Port Harcourt on Sunday.
Anaemena is looking forward to the game on Sunday and discussed his the prospects of the ‘People’s Elephant’ with Rivers United official website.
“Our expectations are very high. We know that Rivers United have prepared for us,” Anaemena began.
“Clubs (in the NPFL) have been winning (both) at home and away from home so we expect nothing less than a win in Port Hacourt.
“We want our fans in Port Harcourt to come out in their numbers to support us on Sunday,” he said.
Technical manager of United, Stanley Eguma, has masterminded wins in all his homes games this term and is keen to stay true to tested and trusted ideals against Nigeria’s most successful club at the Yakubu Gowon Stadium, the club’s stately patch which is fast becoming an impregnable fortress for visiting sides.
Eguma said: “We (Rivers United) have a philosophy and tradition of trying to keep the ball.
“We know that if we do that, we will do more of the playing and we also have to be adventurous, attack and look for goals.
“Against Enyimba, we should perform better than we did (in our last match against Sunshine Stars) because the game on Sunday is an important game.”