NCC Board Chairman to DG: Attend to allegations against you + Documents

The Chairman of the Governing Board of the Nigerian Copyright Commission, Dr. Tonye Clinton Jaja, has reacted to the allegations made against him by the Director-General of the NCC, John Asein, published by The Eagle Online on Wednesday.

Jaja, who has had his lawyer, Femi Falana (SAN), write Asein on the issues in contention, replied to the allegations via a terse brief to The Eagle Online, saying he needed the permission of his superior, the Attorney General of the Federation and Minister of Justice, Abubakar Malami.

The letter obtained by The Eagle Online said: “As a public servant, in my capacity as the Chairman of the Governing Board of the Nigerian Copyright Commission (NCC), I am under the supervision of the Hon. Attorney-General and Minister of Justice and therefore I must seek his permission before I can make any press statement.

“Furthermore, the Code of Conduct Bureau is already undertaking an investigation of allegations against Mr John Asein the Director-General of the Nigerian Copyright Commission (NCC) so it will be prejudicial to make comments on the issues.

“In the first place, I should be the one suing Mr. John Asein because my Compendium is a published book, and in the eyes of the law, only the contents of published books can be plagiarised. So it is actually Mr. John Asein that plagiarised the contents of my Compendium when I submitted a hardcopy to him along with a letter dated sometime in May/June 2019, wherein I requested approval for take-off grant from the Nigerian Copyright Commission for publication of my Compendium, Copyright moot competition for University law students and sundry activities related to running the office of the Chairman of the Governing Board of the Nigerian Copyright Commission (NCC).

“Finally, the title of my publication is ‘Compendium of Nigerian Copyright Law Reports, Vol. 1.’ The word ‘Compendium’ sums up the contents. Mr. Nasiru Tijani, the Deputy Director-General of the Nigerian Law School, Lagos campus (who served as the consultant for my Publication-compendium of Copyright cases) whom Mr. John Asein mentioned in his email of June 23,2019 is alive and witness to the fact that my Compendium was already published and submitted to Mr. John Asein sometime in May 2019, when he was consulting Mr. John Asein regarding funding for printing of copies in lieu of the public presentation of the book which held on August 19, 2019.”

The letter by Falana, dated June 17, 2020, recalled a meeting between the DG and Chairman with the Solicitor-General of the Federation and Permanent Secretary of the Federal Ministry of Justice, Dayo Apata (SAN), where Asein was said to have falsely accused Jaja of plagiarising his book.

Falana added: “You would recall that the purpose of the said meeting with Mr. Dayo Apata was to discuss the allegations of conflict of interest, abuse of office and acts of corruption allegedly committed by your good self in the course of discharging your duties as the Director-General of the Nigerian Copyright Commission. These allegations are of course now the subject of investigation by the State Security Services (DSS), the Code of Conduct Bureau and other Federal Government Agencies.

“However, instead of you to defend the serious allegations levelled against you, you resorted to maligning the hard earned reputation of our client by claiming that he copied and replicated a portion of your book.”

The letter, attached below, went on to make demands Asein must fulfil to stop a court case from being instituted against him.

An affidavit sworn to at the High Court of the Federal Capital Territory, Abuja by Enenche Jeremiah Agada, equally indicted Asein as having allegedly plagiarised over 60 per cent of the content of his book.

Agada added: “In other words, the content of Mr. John Asein’s book fails the originality test.” 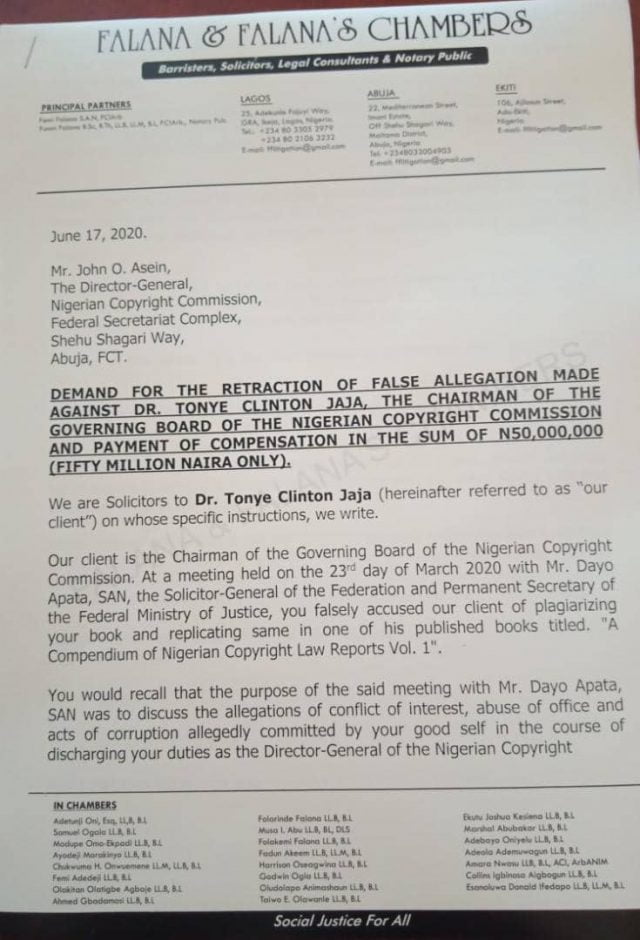 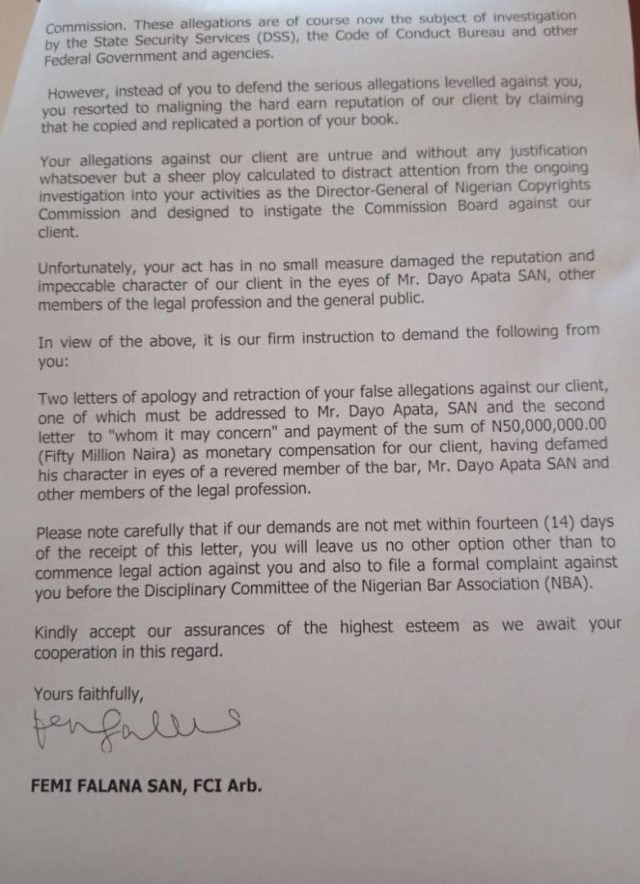 COVID-19: PTF warns against neglect of protocols, gives N1b each to 32 States

NCDC to Nigerians on COVID-19: Don’t rejoice yet, only three States testing adequately