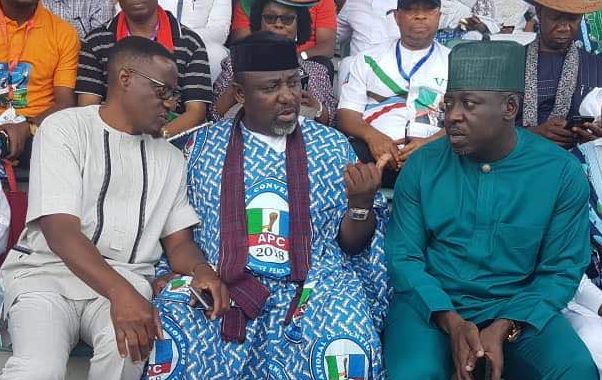 There are three major contentious positions that held up the conclusion of the National Convention of the All Progressives Congress.
The Convention, held on Saturday at the Eagle Square, Abuja, was expected to be concluded in record time but for the contentious positions.
The positions were those of the National Organising Secretary, National Publicity Secretary and National Woman Leader.
In the countdown to the convention, there had been strife over the move by the Imo State chapter of the APC and the South East Zone chapter of the party to retain Senator Osita Izunaso as the National Organising Secretary.
However, this was at the detriment of the Imo State Governor, Owelle Rochas Okorocha, who lost out completely in the process of the Ward, Local Government and State Congresses that led to the emergence of delegates to the National Convention.
But in a last minute rally, Okorocha got the support of his fellow Governors, who put the name of his preferred candidate, Emma Ikeduro, on the Unity List endorsed by his colleagues.
Reports had it that Okorocha has promised to make several concessions, including dropping his choice of his son-in-law as his successor.
However, on the Unity List of President Muhammadu Buhari and that of the National Leader of the APC, Asiwaju Bola Ahmed Tinubu, Izunazo’s name and that of Ikeduro did not feature.
On that of the President, Longers Anyanwu was given the nod, while Tinubu’s list had Dr. Christopher Osuala.
For the National Publicity Secretary, the Governors’ Unity List favoured the retention of Mallam Bolaji Abdullahi, while Lanre Issa-Onilu was the choice of both Buhari and Tinubu.
Both Issa-Onilu and Abdullahi are from Kwara State.
Abdullahi is a confidant of the President of the Senate, Dr. Abubakar Bukola Saraki, and the Kwara State Governor, Dr. Abdulfatah Ahmed.
For the National Woman Leader, President Buhari opted for Salamatu Balwa from Kogi State, while the Governors preferred Ambassador Fatima Adams.
The Organising Committee of the Convention was preparing to announce the full outcome of the election as at press time.
Only the positions of the National Chairman, with former Governor of Edo State, Comrade Adams Oshiomhole, as the sole candidate and 19 others had been sealed as at Saturday.
The other positions, about 40, are still to be decided.