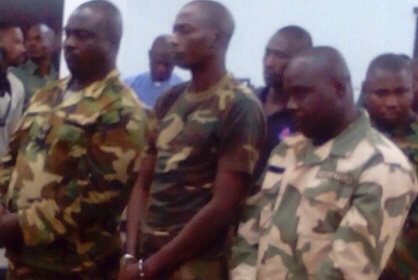 The Army Authority on Tuesday postponed to Thursday the General Court Martial of some soldiers charged with alleged mutiny.
The trial was to have been held at the Mogadishu Cantonment, Abuja.
The postponement of the trial was confirmed to newsmen on Tuesday by a military source, who did not want to be named.
However, when contacted, the spokesman of the Garrison, Colonel Aliyu Yusuf, claimed ignorance of the court martial but promised to inform journalists whenever a date was fixed for the trial.
The source also said lawyers representing the accused soldiers met with legal officers of the court martial on Tuesday morning and agreed to shift trial till Thursday because of the independence holiday on Wednesday.
One of the lawyers appearing for the soldiers, who spoke to newsmen on condition of anonymity, also confirmed that the trial was postponed till Thursday.
“When I got here (trial venue) this morning, I was told that the court martial has been postponed till Thursday because of the independence anniversary coming up tomorrow – Wednesday,” he said.
A News Agency of Nigeria correspondent who was at the venue of the trial at about 10.45am, reports that the court was under lock and key.
NAN also reports that some junior officers sighted in front of the court directed journalists to the spokesman of the Garrison for comment as they were not permitted to speak on the matter.
NAN learnt that the soldiers who are standing trial were alleged to have committed mutiny by “refusing to join troops for an operation” in Maiduguri, Borno State on August 4.