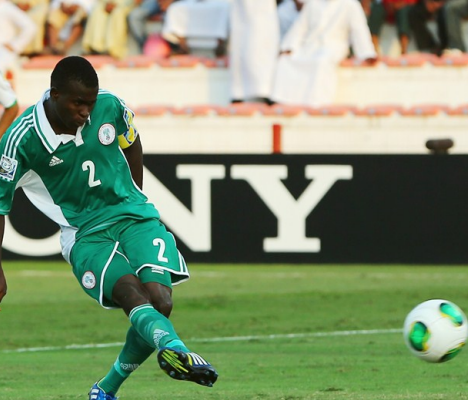 Manchester United are hoping to win the race to sign Nigerian starlet, Musa Mohammed, ahead of Chelsea, Liverpool and Barcelona.
The defender captained Nigeria’s Under-17 team to World Cup glory in Abu Dhabi, United Arab Emirates, producing a number of commanding and assured performances in the process.
Mohammed also showed his prowess from set-pieces, scoring from the penalty spot in the 5-0 group win over Iraq.
Mohammed is attracting huge interest after a superb Under-17 World Cup for Nigeria.
The 17-year-old also netted in the 4-1 second round win over Iran as Nigeria went on to be crowned champions.
Chelsea and Liverpool have been keeping tabs on the young starlet and were weighing up whether to make a January bid for the FC Heart Academy star.
However United are now ready to trump their Premier League rivals by attempting to secure Mohammed, who has also attracted the interest of Spanish giants, Barcelona.
United boss, David Moyes, is preparing to reshuffle his squad in the new year and is willing to let a number of players leave Old Trafford.