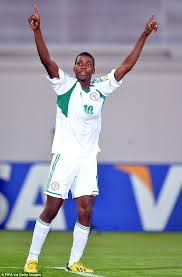 The Most Valuable Player in the just-concluded 2013 U-17 World Cup, Kelechi Iheanacho, has dismissed speculations that he has accepted a contract from Manchester United.
Iheanacho, who spoke with the News Agency of Nigeria in Owerri on Thursday, said he was yet to be offered a deal by any club.
According to him: “Neither Manchester United nor any other club has ever approached me.
“Alhough, I will like to play professional football, I don’t need to make any mistake in the choice of club, so I haven’t made myself available for any club.”
Iheanacho said his main focus since the commencement of the U-17 World cup was to play his best and win the cup for his country.
He said that accepting open conversation with club scouts while the competition was on would have distracted his focus.
Ihenacho added: “But now that the game is over, my agent and parents have a lot to do in my decision to move ahead in my future career.
“I will prefer to start my professional career in England than any other country in the world.”